A baby is dead, a haredi family is missing and in the face of a looming police crackdown, the anti-Zionist haredi umbrella organization Edah Haredit has reportedly put out its version of an all points bulletin to try to find them. 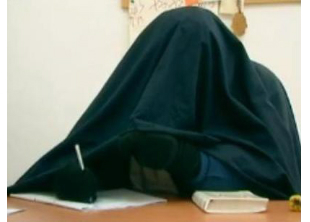 A Burka Cult mother in court in 2009. She was convicted of what is viewed as the most horrific case of child abuse in Israel's history.A different Burka Cult family is now suspected of neglecting their children, causing the death of one and endangering another.

A baby is dead, a haredi family is missing and in the face of a looming police crackdown the anti-Zionist haredi umbrella organization Edah Haredit has reportedly put out its version of an all points bulletin to try to find them.

The Jerusalem haredi Burka Cult family disappeared early today following the suspicious death of one of their children – a one-year-old baby boy – Friday.

Worried neighbors of the family entered the family’s apartment and found the baby dead on the floor. No adults or teenage children were present. The neighbors called Hatzolah. It’s first responders and a team of paramedics from Magen Dovid Adom resuscitated the baby. MDA rushed him to the nearby Sha’arei Tzedek Hospital where doctors pronounced the baby dead shortly afterward.

During the attempts to resuscitate the baby, first responders and paramedics repeatedly asked for the baby’s parents. Eventually, a woman wearing a burka entered the apartment and admitted being the baby’s mother. When paramedics asked if the baby had been immunized against the flu, his mother responded that they did not believe in vaccinations. Allegedly, the child received no other medical care, as well, because the family eschews it.

After the baby’s death, police questioned the parents and were reportedly preparing to have them charged with child neglect.

The family’s sudden disappearance early today prompted Edah Haredit to post flyers in Mea Shearim and haredi neighborhoods near it ordering that “the order of Rabbi Yitzchak Tuvia Weiss” the head rabbi of Edah Haredit, “anyone who knows the family’s whereabouts must inform the Edah Haredit.”

Police arrived at the family’s home earlier today following reports that a second young child in the family also has the influenza virus, but the family had reportedly fled.

Police warned that if the child is not brought to a medical clinic or a hospital immediately, police will begin an intensive search for the family.

Over the past few years, the rabbis of Edah Haredit have been divided. Some have opposed the Burka Cult and some have supported it. But that support has almost completely eroded in the past 18 months.

During the past decade the nascent cult has seen several child abuse and neglect scandals, including one that is considered to include the worst cases of child abuse in Israel’s history.

In that case, and in several others, Edah Haredit sided with the Burka Cult family.

However, doing so publicly now, at a time when a new government is forming and the military draft of haredim – which is strongly opposed across the spectrum of haredi leaders who are fighting it in every (so far legal) way possible – looms, being seen publicly as supportive of Burka Cult excesses and child neglect could have severe consequences that would impact haredim for decades to come.

Haredi Burka Cult women and girls (also known as the haredi Taliban Women and the Shawl Women) cover themselves in layers of dark clothing, shawls and even veils so their entire bodies, including their fingers, are covered in a shapeless, dark sack-like enclosure to meet the cult's modesty requirements.

The cult is made up primarily of newly-haredi Jews who came from the secular or Modern Orthodox communities and who were originally inducted into haredism by an offshoot of the Breslov hasidic sect. The cult blends teachings of Breslov's founder, Rabbi Nachman of Breslov, with kabbalistic teachings from Ashkenazi and Sefardi sources.

A baby is dead, a haredi family is missing and in the face of a looming police crackdown, the anti-Zionist haredi umbrella organization Edah Haredit has reportedly put out its version of an all points bulletin to try to find them.