"Until then, the only thing to do is not to get married in this country…Make [conjugal] agreements, ceremonies, but don't register for marriage." 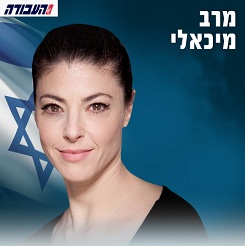 Labor Party MK Merav Michaeli urged Israeli Jewish women not to get married – as long as the haredi-controlled state-funded chief rabbis continue to control the process. Ha'aretz reported that Michaeli also called for the end of the state-funded rabbinate’s monopoly over marriage, divorce and issues of personal status.

"Until then, the only thing to do is not to get married in this country…Make [conjugal] agreements, ceremonies, but don't register for marriage," Michaeli said yesterday at a Knesset debate about the plight of agunot, women whose husbands are unwilling or unable to grant them a Jewish divorce known in Hebrew as a get.

Without a get, a woman cannot remarry and any children she might have with sexual partners other than her recalcitrant husband would be classified as mamzerim, bastards, and would be banned from marrying “pure” Jews as would their children and grandchildren for ten generations in total.

"The rabbis were wrongly given the sole authority over Jewish Israelis' personal status. Instead of acting to solve the problems in halakhic ways, the rabbis are doing the opposite, to demonstrate they have the power to run our lives,” Michaeli said.

MK Aliza Lavie of Yair Lapid’s Yesh Atid party organized the debate. She urged the Knesset to act to ease the distress of agunot.

"This Knesset is committed to solve this problem and other stagnant state and religion issues. This is crucial to the state and to any Israeli who respects his own Jewishness and the state's," she said.

MK Rabbi Shay Piron of Yesh Atid, who was a prominent member before his election to Knesset last month of the Modern Orthodox Tzohar rabbis organization which seeks to overcome the Byzantine bureaucracy and gruffness of the haredi-controlled state rabbinate, said the solution for agunot should not come from Knesset legislation. Instead, Piron claimed, the rabbis are the ones who must find a solution, he said.

"Such changes are not brought about with legislation. Halakhic rulings and issues associated with halakhic controversy don't go through the Knesset," Prion reportedly said, angering several MKs.

MK Michal Rozin of the left of center Meretz Party vehemently opposed Piron's stance, claiming that the problem of men who refusal to grant their wife a Jewish divorce is part of the larger problem of violence against women in Israeli society.

"I say the solution must be in the government’s hands. Civil marriage and divorce procedures are a necessary condition for this. Israel must remove women's personal status from the rabbis' control," she said.

After the Knesset debate ended, Piron wrote on Facebook that the meeting with agunot "tore at his heart." He urged "as many men as possible" to put pressure on the rabbis to solve the problem.

"Until then, the only thing to do is not to get married in this country…Make [conjugal] agreements, ceremonies, but don't register for marriage."