« Secular Jews Have To Serve In Israel’s Military Because The Wars Are All Their Fault, Hasidic Rebbe Says | Main | Satmar Principal Charged With Assaulting 10-Year-Old » 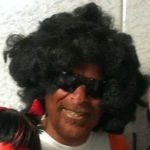 New York State Assemblyman Dov Hikind (D- Brooklyn) held a huge open Purim party in house yesterday that reportedly continued for 14 hours. And then there were the costumes – or, more accurately, Hikind’s costume. 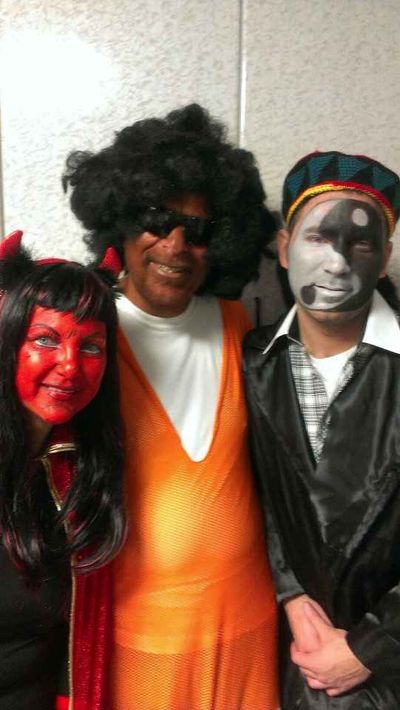 And then there were the costumes – or, more accurately, Hikind’s costume.

Purim is, after all, one giant costume party, and Hikind could have nothing but the best. So according to The Politicker he hired a professional makeup artist to come and change the him from a white middle age Brooklyn politician into a black basketball player complete with an afro wig – and blackface.

“I was just, I think, I was trying to emulate, you know, maybe some of these basketball players. Someone gave me a uniform, someone gave me the hair of the actual, you know, sort of a black basketball player. It was just a lot of fun. Everybody just had a very, very good time and every year I do something else. … The fun for me is when people come in and don’t recognize me.…

“I can’t imagine anyone getting offended. You know, anyone who knows anything about Purim knows that if you walk throughout the community, whether it’s Williamsburg, Boro Park, Flatbush, Forest Hills, Kew Gardens Hills, people get dressed up in, you name it, you know, in every kind of dress-up imaginable. Purim, you know, everything goes and it’s all done with respect. No one is laughing, no one is mocking. No one walked in today and said, ‘Oh my God.’ … It’s all just in good fun with respect always, whatever anyone does it’s done with tremendous amounts of respect and with dignity, of course,” ” Hikind told The Politicker.

There was no word last night from Hikind about how he would react if, say, a non-Jewish man dressed kinda like a hasid. 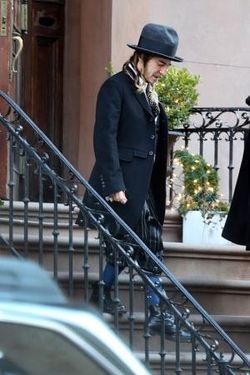 But thankfully, we do have a pretty good idea of what Hikind would do if a non-Jew dressed in a way that could be understood to be play on hasidic attire, because the issue came up two weeks ago when designer John Galliano (left) did just that, enraging Hikind.

And when Hikind is enraged, he spews.

“Who is he mocking?. The way the socks look, the jacket, the peyos . . . My question is, who’s he laughing at?

“If it was just anyone else, I wouldn’t know what to say. But considering who this guy is, considering his background and what he’s said in the past, let him explain it to all of us: Are you mocking us?,” Hikind blustered to the New York Post.

It turned out that Galliano was wearing other designers' clothing and was not trying to make fun of hasidim. Even Abraham Foxman of the Anti-Defamation League came to Galliano's defense.

But Hikind did not apologize for his outburst.

Less than two weeks later, Hikind was so proud of his blackface costume that even though blackface is widely regarded as racist, he posted a picture of himself and his family in their Purim costumes on Facebook yesterday.

Politicker thankfully copied it because Hikind seems to have sanitized his Facebook page this morning.

New York State Assemblyman Dov Hikind (D- Brooklyn) held a huge open Purim party in house yesterday that reportedly continued for 14 hours. And then there were the costumes – or, more accurately, Hikind’s costume.