Haredim refuse to serve. Haredi leaders make it clear to negotiators from Israeli Prime Minister Benjamin Netanyahu's philo-haredi Likud that they will not compromise at all on the issue of haredim being drafted into the military. 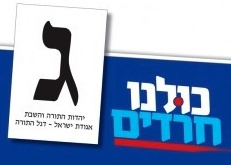 There will be no compromise.

MKs Moshe Gafni, Yaakov Litzman and Meir Porush told the Likud team that UTJ insists it will not agree to any compromise that results in haredim being drafted into Israel’s military.

To make their point, the Jerusalem Post reports that Litzman took NIS 200 bill out of his pocket and read the quote printed in it from Israel’s third president Zalman Shazar.

“... [R]ich and poor, childless and those with many children, single and not single, everyone together needs to bear the yoke of Torah study,” the quote reads in part.

Litzman said this quote was his plan for equally sharing the national defense burden – meaning that non-haredi should study Torah rather than haredim serve in the military.

Litzman and his colleagues insist that every haredi male who wants to study Torah full time should be able to do so. They should be exempt from any military draft and their study should be subsidized by the state, UTJ insists.

Likud’s plan for the haredi draft, which was written by the chairman of the National Economic Council in the Prime Minister’s Office, Professor Eugene Kandel, sets an annual target of 60 to 65 percent enlistment of haredi men between the ages of 18 and 24 beginning five years from now.

Likud’s is considerably more generous to haredim thn rival political parties like Yesh Atid, and its plan does not seem to be in compliance with the High Court of Justice ruling a year ago that made haredi draft exemptions to be illegal.

Friday’s edition of UTJ’s Yated Ne’eman daily newspaper published a proclamation from the Council of Torah Sages of the (hasidic) Agudat Yisrael faction of UTJ. It denounced any change that would “injure the holy yeshivas and remove Torah from its students…to obligate them to a yoke other than that of the Torah,” i.e, to obligate them to serve in the military. The proclamation ordered yeshiva students not to enlist in any form of military service.

“Even if they want to take you to jail, and if they want to remove your rights and decree upon you poverty and need, do not fear and God will be with you to sanctify his name with love,” the rabbis’ proclamation concluded.

Also last week, Rabbis Aharon Leib Shteinman and Shmuel Auerbach, the leaders of the two non-hasidic haredi factions in UTJ, both declared that no compromise on the issue would be allowed. Only full time Torah study for all who seek it and a complete ban on military service would be acceptable.

Significantly, Shteinman, the more moderate of the two leaders, issued his proclamation first, leaving no doubt that it was made of his own accord rather than as a response to his more conservative rival.

Posted at 01:04 AM in Haredim, Israel, Religion, Religion & State | Permalink

Haredim refuse to serve. Haredi leaders make it clear to negotiators from Israeli Prime Minister Benjamin Netanyahu's philo-haredi Likud that they will not compromise at all on the issue of haredim being drafted into the military.