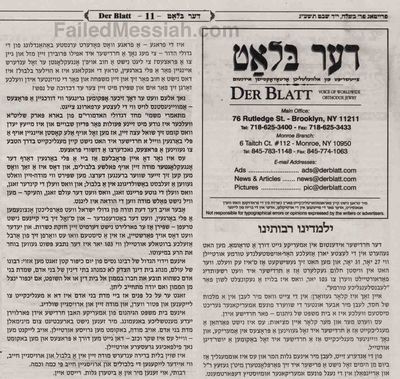 [1-28-2013: Hat Tip for the scan –  An unnamed source who apparently got it from Rabbi Nuchem Rosenberg but who forgot to mention that to me.]

Here is a free translation (made by a native Yiddish speaker from a hasidic community) of Der Blatt's editorial about the 103-year sentence given to Rabbi Nechmya Weberman last week after he was convicted of repeatedly sexually abusing a young girl beginning when she was 12-years-old and continuing until she was 15. I edited that translation for clarity:

The haredi community in America is going through terrible trauma. We have heard about prison sentences in the last few years [given to members of] our community that [makes] the hair on our heads stand up – for example, 27 years [Sholom Rubashkin of Agriprocessors – bank fraud, etc.], 31 years [Rabbi Baruch Lebovits – child sexual abuse] – and we said that its the end of the world. Who in his wildest dreams would think that a haredi Jew would be cruelly sentenced to 103 years prison, a sentence that is just a tricky way of saying "life in prison”?

One thing has become clear: as long as we live under this democracy ["malchut shel hesed," literally "a government of kindness" – a rabbinic term that means a modern Western democracy like the United States or Great Britain], we also live under the sword of the American justice system that comes with it – which is a court of hell for haredi Jews.

On the other hand, we live in a bitter exile and it is therefore impossible that much time will elapse without another Jew getting in trouble with the law, God forbid, and falling into the clutches of the American Justice Department.

And the question - a question what requires serious handling from the gedolei hador [leading haredi rabbis] – is, is a haredi Jew even allowed to try his luck and go to trial? Or is he mandated to submit to a plea bargain even though [as with Weberman] the charges are only an empty blood libel? Is [accepting a plea deal] not required for him and for his family and for the thousands of Jews who worry about him and feel his pain in their very souls?

After all, it is certainly easier for him to sacrifice himself [by taking a plea deal] rather than going through a trial – as the results of the last few trials show.

It is said in the name of one of the gedolim of Borough Park, shlita, [the Munkatcher Rebbe] who in known as a big activist who helps with pidyon shvuim [literally ransoming captives, but the meaning here is working to get convicted criminals easier sentences, finding accused criminals and convicted criminals who can appeal their sentences them the best legal help and helping them pay for it, and doing what he can to see that they are not arrested or indicted in the first place] and he is counseling everyone who comes to him to ask for his legal advice that they should at all costs submit to a plea bargain because "a haredi Jew has no chance in the natural order of things [i.e., without a miracle] to win at trial, especially in a jury trial.”

But there is a problem. In a plea bargain the alleged criminal has to admit guilt for the false charges and libel, and that is a very hard thing to bring yourself to do. It feels like admitting [guilt in this narrow legal context] would be [the same as actually] being guilty, and [pleading guilty would therefore be like] libeling yourself. What will his children say? What will his good friends say? What will the [haredi] community say? The main thing is that [haredim in this situation] don't want to falsely admit guilt [in order to take the plea deal], because the admitting itself is a lie.

But if a ruling of the leading haredi rabbis of this generation would demand that everyone [facing criminal charges] must accept a plea bargain, then the accused person – and this should not happen to anyone – would feel that he would not lose his hezkat kashrut [the good reputation that halakhically imparts to a person a level of trust that allows him to be believed and his testimony accepted as truth barring any specific proof that it isn’t] by accepting a plea deal, and everyone would also understand that in a system where brutal sentences like 103 years in prison are handed down indiscriminately, the accused criminal is simply choosing the lesser of two evils.

In the vidui repentance prayer written by Rabbeynu Nissim it says that on Erev Yom Kippur we say: Ribbono Shel Olam [Master of the World], the conduct of your Beit Din of Truth is not like the conduct of the beit dins of humans, because with humans, when someone summons his friend to a beit din to settle a monetary dispute or to [secular] court, if the accused is acquitted he is saved from paying the money, and if he admits guilt he is ordered to pay the money. So he is saying that with humans there is the possibility of denying guilt and being acquitted [at trial], and the possibility of admitting guilt and leaving court a guilty man. But only in the American justice system from hell have haredi Jews lost every human right. We are not even treated as human beings. If we admit guilt, then we get excessive punishment; and if we deny guilt because the charges are lies and are false, and we go to trial, then we get an even more excessive and draconian sentence.

It is already far better to take a plea bargain and admit to false charges that are libelous and therefore be judged guilty, rather than denying the libel and being judged guilty but suffering a hundred times worse. Beware! We are in a bitter exile! We must pray [for a speedy end to the bitter exile and for salvation]!