Russia Threatens To "Retaliate" Against US Over Chabad Books Ruling

On Wednesday, US District Court Judge Royce C. Lamberth ordered Russia to pay fines of $50,000 per day until it returns the Schneersohn Collection of books and manuscripts to Chabad in Brooklyn. In response, Russia threatened to "retaliate" against the US if it tries to enforce that ruling. 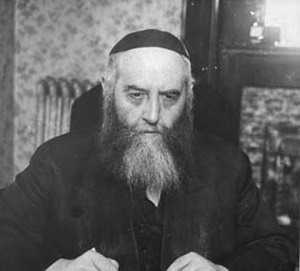 On Wednesday, US District Court Judge Royce C. Lamberth ordered Russia to pay fines of $50,000 per day until it returns the Schneersohn Collection of books and manuscripts to Chabad in Brooklyn.

Lamberth is known as a flamboyant judge who issues unenforceable rulings against foreign governments. This ruling is no exception.

The books and manuscripts last belonged to a Schneersohn in 1940, when they were seized by the Nazis after Rabbi Yosef Yitzchok Schneersohn, the Lubavitcher Rebbe of that era, was rescued from them by German Military Intelligence and the US Government, which had not yet entered the war against Germany.

Infamously, just after the Germans handed over the great Chabad leader to the US just across the border in then-neutral Latvia, Schneersohn asked the Americans to go into Poland and save his silver, his household goods, and his books. The great rebbe did not ask the US to save any Jews – not even his own relatives.

Schneersohn had been a book collector since his preteen days. He collected broadly, favoring secular books like Arthur Conan Doyle's Sherlock Holmes stories translated into Yiddish. He also collected expensive Judaica, and had inherited his father's library, which had many old religious books. And these books, from the most secular to the most religious, meant more to him than th lives of Jews.

There are extant letters in US Government archives from Schneersohn to President Roosevelt written during the war after his arrival in New York. None of those letters ask Roosevelt to save Jews or bomb the rail lines to Auschwitz or anything at all like that.

Shortly after his arrival in New York, Schneersohn joined the Va'ad Hatzolah, the rescue organization set up by Orthodox and haredi rabbis. But he quit the Va'ad not long after joining it, upset that the Va'ad sometimes raised money on Shabbat when it was urgently needed for a rescue. He was also upset that he did not get every penny of the money he helped raise for the Va'ad back from it. He expected that if he raised $5,000 for it, then $5,000 would be available for him to use to try to rescue his own people rather than be used for whatever rescue was most pressing or carried the greatest likelihood of success.

Schneersohn then started his own rescue committee but it failed, largely because the only person affiliated with Chabad in any way who had the ability to save anyone was a non-Orthodox attorney in Washington, D.C. who had worked full time on Schneersohn's rescue. Chabad owed him about $5,000 but refused to pay – even though it had the money before Schneersohn launched his own failed rescue operation.

The attorney sent at least one telegram to Rabbi Yisroel Jacobson, who headed Chabad's operations in the US before Schneersohn's arrival and who had hired the attorney, after Schneerohn's rescue begging to be paid and pointing out that his wife was pregnant and he needed the money so he could pay to keep his heat on. Jacobson, even though he had the $5,000 in the bank, never answered him and never paid. Schneersohn, for whom his followers claimed prophesy, didn't pay him, either.

Schneerohn closed his rescue organization soon after launching it. He took the money he had raised from New York Jews to save lives and used it to open a yeshiva in Crown Heights, Brooklyn – the yeshiva now commonly known as 770 after its address, 770 Eastern Parkway.

(Many of these details are documented in Bryan Mark Rigg's Rescued From The Reich, primarily in the footnotes.)

It is this moral failure of a man whose books Chabad is fighting Russia for.

Russia, upset with the judge's ruling, threatened to retaliate against the US because of it:

…It was not immediately clear what form the Kremlin’s threatened retaliation would take. In an earlier reaction to the dispute over the collection, which has now lasted decades, it forbade its state-run museums, including the Hermitage in St. Petersburg and the Pushkin Museum of Fine Arts in Moscow, to lend works to American museums.…

Today, much of the Schneerson [sic]  Collection is tucked into a well-lighted corner room of the Collection of Oriental Literature in an annex of the Russian State Library, across Mokhovaya Street from the main Lenin Library building.

Through the front door, and past several reading rooms, there is a hall dedicated to Yiddish and Hebrew studies with perhaps 20 desks. The Schneerson [sic]  Collection itself is held in its own room nearby, in 16 wooden bookcases with glass doors and locks that line the green walls.

Marina V. Melanina, the general director of the Center for Oriental Literature, said that about 30 to 60 visitors each month asked to see holdings in the collections, mostly Hasidic Jews recognizable in their traditional black coats and hats.

“Most of the interest is in tour groups who come to us, not only Russian ones but from America, not long ago from Australia; Israelis come too,” Ms. Melanina said. “For readers, there is not much demand. There are a couple of academics who order books in the catalog and read them.”…

Do the books belong to Chabad?

But they aren't fighting for possession, probably intimidated by the violence and near-constant threats of violence their father and grandmother, Schneersohn's oldest daughter, had to live through when the US part of the Schneersohn library was fought over in the 1980s.

Here's what their grandmother looked like after a Chabad yeshiva student beat her on a Shabbat after her brother-in-law Menachem Mendel Schneerson (a distant cousin of Rabbi Yosef Yitchok Schneersohn), who was then the Lubavitcher Rebbe, publicly ranted and raved against her and her son: 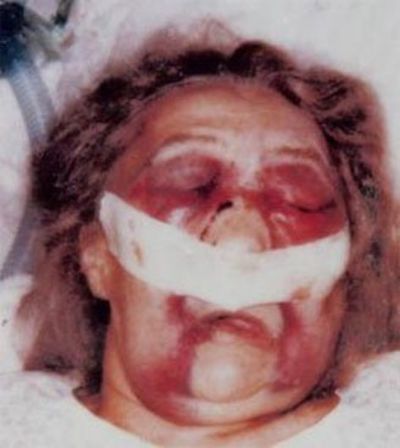 Chabad helped that yeshiva student flee the US for Israel, getting him to the airport on Shabbat and on  the first plane to Tel Aviv. He was never extradited and lives openly in a Chabad community there now as he has since the day he landed in the mid-1980s.

So absent Barry's daughters' claim for the books, I can see awarding them to Chabad, but only with strict controls that mandate full access to al researchers – even researchers Chabad doesn't like.

Otherwise the books will be kept in a way that prevents those who tell the truth about Chabad and expose its lies from using them.

Chabad is notorious in the academic world for blocking access to the books from the 1980s court case, even though it promised to make them fully available to researchers. And even if Chabad would suddenly change its ways and allow full access to all scholars, there's still the little problem of getting in and out of Crown Heights safely – something several of these researchers and academics fear they can no longer do.

So perhaps the books should be housed and cared for by a university library, with an academic committee in place to oversee it.

No one should think that Russia is a good actor here – it isn't.

The problem is, Chabad really isn't either.

Posts On Chabad And The Holocaust.

Posted at 08:18 AM in Chabad, Chabad History | Permalink

Russia Threatens To "Retaliate" Against US Over Chabad Books Ruling

On Wednesday, US District Court Judge Royce C. Lamberth ordered Russia to pay fines of $50,000 per day until it returns the Schneersohn Collection of books and manuscripts to Chabad in Brooklyn. In response, Russia threatened to "retaliate" against the US if it tries to enforce that ruling.