« Vicious Anti-Zionist Children’s Book Distributed By Satmar In Hopes Of Convincing Haredim Not To Vote | Main | Report: Many NY Haredi Schools Violate The Law, Teach Little Or No Secular Subjects »

The chairman of Israel’s Central Elections Committee Justice Elyakim Rubinstein was reportedly enraged after the right wing Zionist Orthodox Habayit Hayehudi political party ignored an injunction he had issued banning one of its campaign ads as deceptive. 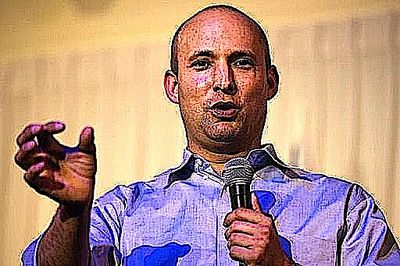 Rubenstein ordered Habayit Hayehudi to remove all billboards and campaign posters that feature a picture of Prime Minister Benjamin Netanyahu alongside Habayit Hayehudi’s Chairman Naftali Bennett, and the caption, "Strong Together — Choose Bennett." Rubinstein ruled that the ad was deceptive because it implied that both men were running on the same ticket.

Habayit Hayehudi did not begin to remove the ads until Sunday, almost three full days after the injunction was issued.

HaBayit HaYehudi's Chairman Naftali Bennett is a high tech entrepreneur who is a multimillionaire many times over.

"Habayit Hayehudi's conduct suggests that they tried to avoid implementing the injunction in the days after it was issued, in hopes that it would be overturned in light of the proximity to election day. I cannot agree to that. Knesset candidates cannot dismiss injunctions issued by the chairman of the elections committee, or violate them, even if they don't agree with the injunctions. Compliance with the law and court provisions should be a beacon to anyone who considers himself worthy of being a member of the Israeli Knesset,” Rubenstein wrote.

Habayit Hayehudi responded by saying that it would honor "the Likud request and remove the pictures of the prime minister from the signs. Now there will only be pictures of Naftali Bennett and the public will no longer be confused about whom they are voting for."

Rubinstein also dealt with another complaint against HaBayit HaYehudi. The complaint seeks to disqualify Jeremy Gimpel, who holds the 14th spot on the party’s Knesset list. It was filed by the Hatnuah party, and is based on a video of Gimpel giving a public talk in the US. In that talk Gimpel reportedly implies that the Muslim shrine the Dome of the Rock which sits on the Temple Mount in Jerusalem could be blown up to build the Third Jewish Temple.

“The things [Gimpel says], on the surface, sound very bad," Rubenstein said. But he refused to rule until he watches the entire video.

The Sefardi haredi Shas Party was fined almost $10,000 this week by Rubenstein for giving away amulets and offering blessings from Rabbi Ovadia Yosef in exchange for votes.

The chairman of Israel’s Central Elections Committee Justice Elyakim Rubinstein was reportedly enraged after the right wing Zionist Orthodox Habayit Hayehudi political party ignored an injunction he had issued banning one of its campaign ads as deceptive.