The letter, signed by the head rabbi of the Union of Orthodox Hebrew Congregations (Kedassia) Rabbi Ephraim Padwa also attacks the media and admits that it was only issued to mitigate damage to UOHC's reputation that will come from Channel 4's upcoming exposé. 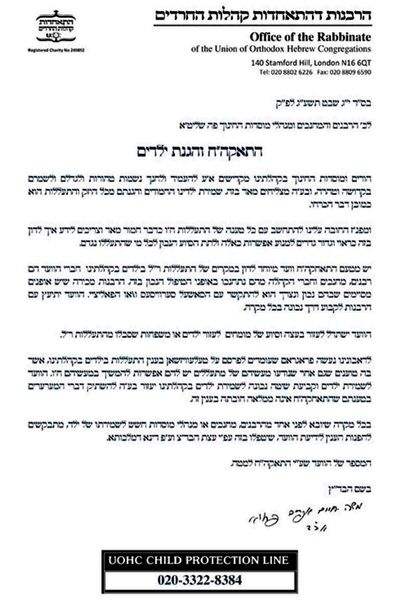 The letter written on Union of Orthodox Hebrew Congregations (Kedassia) stationary says that it is “our duty” to consider “every allegation” of child sexual abuse a “very serious” thing. UOHC therefore needs to inform the haredi public how to properly deal with this and to “make fences” to prevent it and to properly help everyone who has been abused.

UOHC says it has a committee of “rabbis, teachers and members of the community who know how to properly help abuse victims,” set up to deal with abuse cases in the haredi community. UOHC’s “rabbinic leadership recognizes that there are certain times when it is correct and necessary to call the social services and police. The committee will consult with the those rabbis to determine the proper course of action in each case. The committee will try to use the advice and help of experts to help families or children who have suffered from abuse, may God protect us.”

In other words, rabbis will screen cases and rabbis will decide whether or not police or social services will be called and the committee will try to follow the advice of experts to help victims and their families – but it will not promise to do so.

Almost certainly because 99.999% of these experts are not UOHC members or haredim, and to seek and follow their advice means to involve people outside the haredi community that UOHC does not control. And UOHC can’t have that in many cases – especially in cases of child sexual abuse where UOHC does not want police or social services to be involved. Why? Because those experts are often mandated reporters who will report the abuse to police or social services.

UOHC goes on to criticize Channel 4’s upcoming exposé on UOHC’s alleged abuse coverups, which allegedly cover many decades, and says that the UOHC hopes that the formation of this committee to deal with child sexual abuse will silence the accusers.

“Unfortunately a program has been made that is about to be broadcast on television about the abuse of children in our community claims that even after the actions of abusers are known” to UOHC’s rabbis, the abusers “have the possibility of continuing in their acts” because UOHC allegedly doesn’t report them to police or social services. “The Committee for Child Protection and Determining the Correct Way to Protect Our Children in Our Community will help, God willing, to silence the claims of the inquisitors that the UOHC does not fulfill its obligation in this matter.

“In every case that comes before a rabbi, teacher or principal of one of our schools, where there is fear for a child's safety, you are asked to refer the matter to the committee which will deal with it in consultation with the beit din tzedek [the Jewish religious court of UOHC] and according to the law of the land.”

The letter is signed by UOHC Chief Rabbi Ephraim Padwa. Underneath his signature is the number of the UOHC’s child protection line.

There is no number listed for UK Social Services or for the police.

Worse yet, the letter was only issued as a public relations stunt to try to mitigate the legitimate damage to UOHC’s reputation that will clearly come from Channel 4’s exposé.

[Hat Tip to IfYouTickleUs for the letter.]

The letter, signed by the head rabbi of the Union of Orthodox Hebrew Congregations (Kedassia) Rabbi Ephraim Padwa also attacks the media and admits that it was only issued to mitigate damage to UOHC's reputation that will come from Channel 4's upcoming exposé.