« At Least 30 Homeless In Kiryas Joel Fire | Main | How Do Haredi Schools Get Away With Not Teaching Math, Science, English, Civics, and American History? Like This… »

The ruling forbids a victim of sex abuse from testifying in secular court against his rabbi abuser.

I'm re-posting it now because this ruling was cited in the Baruch Lebovitz trial, and even though it was, the Brooklyn DA did not prosecute the beit din judges for witness tampering and intimidation.

And now that the DA is about to prosecute Samuel Kellner for allegedly extorting Baruch Lebovits' son Meir, even though the evidence the DA has against Kellner seems to be trumped up, I thought it would be a good time to remind him that there are other haredi criminals who need to be prosecuted, men who intimidate witnesses and harass victims. And here you have hard evidence against one of them. I hope you use it, Joe. 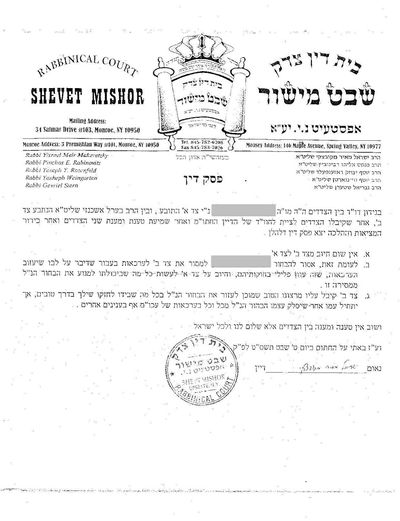 In the matter of the dispute-matter between the sides, that is Mr. ____ Side A the plaintiff, and between Rabbi Berl Ashkenazy shlit”a (should merit to long good years??) the defendant, side B, after the (sides) disputants agreed to heed the judgment of the dayan signed below, and after listening to the arguments and counter arguments of both sides, and after sorting out the facts and the halacha (Jewish law) ,the following ruling went out.

A. There is no obligation from side B to side A.

B. In contrast to this, it is forbidden for the young man (bochur) _____ to inform on side B (Rabbi Ashkenazy) to the courts (because) [that] he (talked on his heart) [tried to persuade him] that he should leave the courts, which is according to their laws a grave crime, and there is an obligation on side A to do whatever is in his ability to deter the above mentioned young man from this (mesirah) [informing].

And there are no more arguments and counter arguments between the sides, only peace to us and to all Israel.

The ruling forbids a victim of sex abuse from testifying in secular court against his rabbi abuser.