Dozens of local residents and right-wing activists from across Israel demonstrated last night after learning that an 83-year-old Jewish woman was raped in the backyard of her apartment building near Tel Aviv's Central Bus Station. 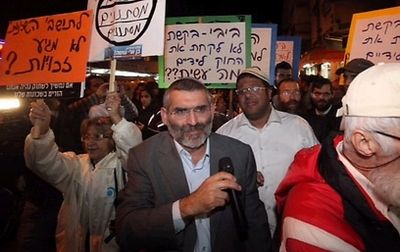 Dozens of local residents and right-wing activists from across Israel demonstrated last night after learning that an 83-year-old Jewish woman was raped in the backyard of her apartment building near Tel Aviv's Central Bus Station, Ynet reported. The rape allegedly continued for several hours. Her alleged rapist is an Eritrean refugee.

The protesters waved signs attacking African refugees – which they called “migrants” and infiltrators – and called for their deportation.

"The elections seemed to have forgotten the most painful issue. People are focusing on all the 'bla, bla, bla' while life here has become a living hell," Ben Ari reportedly said.

Dozens of people followed the Kahanists as the marched, hurling slurs at African refugees as they passed by.

"We warned that this is what would happen. Why did we have to wait for it to come true?" Ben Ari shrieked. The refugees steal bikes and cellphones all the time and police do nothing, Ben Ari claimed. It’s routine. "Now it seems that even the rape of an 83-year-old woman barely crosses the police's threshold," he told Ynet.

"There are rapes and crimes non-stop. The streets have become flooded with refugees and their businesses, even though they do not pay taxes. Israeli businesses in the neighborhood have all gone under; there is no one to sell to. Where is the mayor? Why isn’t he taking care of this? The area is not safe for a mother with a stroller or for a child returning from school. There is no law, and its a crying shame,” Sima Nisani, a resident of the south Tel Aviv HaTikva neighborhood and a political activist reportedly said.

Korin Galilee, whose mother was brutally beaten to death in 2010 at the hands of a Sudanese refugee not far from where the rape took place, was shocked by the crime and by what she saw as police neglect.

"I just can't believe it, I am truly in shock. This is such a horrendous crime and I am sure it is not the only one. There are many incidents in which foreign workers rape prostitutes that aren’t even reported. The area has become occupied by refugees. [The police barley note the identity of the criminals in reported cases in order  to] sweep the facts under the carpet,” Galilee claimed, demanding that the refugees be "returned to where they came from."

Israel does little to nothing to help these refugees. It blocks them for working legally in the country, which leads to them being exploited by employers. It refuses to grant official refugee status to many who qualify for it. It provides no food or housing save for an internment camp in the southern Negev desert. Police are allowed to arrest people who look as if they could be refugees and detain them without proof. Some estimates are that hundreds of African refugees were arrested this way in past month alone.

African refugees reportedly hid in their homes last night, fearful that the protest would turn violent as others have done in the past.

Israel’s ruling coalition government did nothing to try to calm the rising racial tensions.

Dozens of local residents and right-wing activists from across Israel demonstrated last night after learning that an 83-year-old Jewish woman was raped in the backyard of her apartment building near Tel Aviv's Central Bus Station.