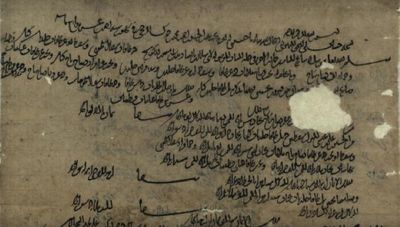 The manuscripts are the first physical evidence of the existence of the Jewish community that thrived there a millennium ago.

Israel's National Library unveiled the collection of manuscripts, dubbed the Afghan Genizah, earlier today. They deal with a broad spectrum of life experiences, from  personal letters and financial records to rabbinic and biblical commentaries.

Researchers say the Afghan Genizah is the most important and largest genizah or archive type find since the famous Cairo Genizah was discovered by Solomon Schechter in the attic of an Egyptian synagogue in 1896.

The Afghan Genizah opens an unprecedented window into the daily lives of Jews of 11th Century Persia.

"We've had many historical sources on Jewish settlements in that area. This is the first time that we have a large collection of manuscripts that represents the culture of the Jews that lived there. Until today we had nothing of this,” Haggai Ben-Shammai, the library's academic director, told CBS News.

How the manuscripts suddenly emerged remains murky. Ben-Shammai said the library was contacted by various antiquities dealers who had taken possession of the manuscripts – although how and when this happened has not been made clear.

Even so, after long negotiations with those antiquities dealers, last month the library purchased 29 manuscripts out of the hundreds that are said to be available.

The library reportedly refused to say how much it paid for the manuscripts it purchased saying that it wants to purchase more manuscripts in the future and doesn't want to drive up prices.

The manuscripts arrived in Israel only last week.

Aviad Stollman, who curates the National Library's Judaica collection, said it will take time to study the manuscripts and to do in depth research on them. But just having the manuscripts allows them to tell a story of a little known and previously undocumented community.

"First we can verify that they actually existed — that is the most important point. And of course their interests. They were not interested only in commerce and liturgy; they were interested also in the Talmud and the Bible. They were Jews living a thousand years ago in this place. I think that is the most exciting part," Stollman said.