Hey, thanks for coming! Mind if we dump a load of dirty diapers on your heads? Students from the Bnei Akiva affiliated Ohr Etzion Zionist Orthodox army preparation high school were met with curses and dirty diapers when they visited the haredi Jerusalem neighborhood of Mea Shearim Thursday. 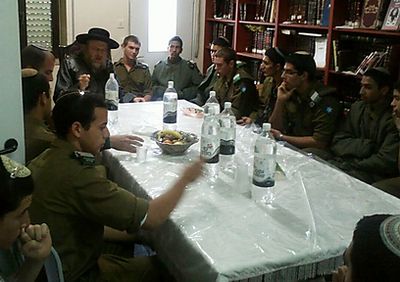 Hey, thanks for coming! Mind if we dump a load of dirty diapers on your heads?

The students were dressed in IDF uniforms and were in the middle of a tour of the neighborhood. As part of tours introducing them to different groups Israeli society, the students began walking to the home of a hasidic rebbe they were scheduled to meet.

But in one of the neighborhood's alleys, they were met by local residents who blocked their way and attacked them.

Screaming,”Nazis, get out," the haredim threw dirty diapers and bags of garbage at the students.

An eyewitness reportedly told haredi journalist Yaki Adamker that before the students came they were warned not to wear IDF uniforms because those uniforms could be considered provocative by Mea Shearim haredim.

"We're in a sensitive time in which haredim are fighting against draft attempts," the unidentified man reportedly told Adamker, noting that when the incident was over, haredim argued among themselves over the use of the Nazi slur, with some arguing that it was wrong to have used it because some of the students wore yarmulkes.

The rabbi in charge of the students was proud of how they acted.

“We teach our students the splendid values of the Torah, the Jewish people and the Land of Israel – the same Torah that commands us to honor all people in general, and every Jew in particular.

"The Second Temple has already been destroyed by unfounded hatred," the rabbi added. "We, who are deep inside the redemption process ahead of the construction of the Third Temple with God's help, are unwilling to destroy what has already been built so far.

"Therefore, we practice unfounded love, prefer to be on the offended side rather than on the offending side, and will do everything to prevent another war between brothers. This is the main reason why our students chose not to respond to the curses and trash hurled at them.

“…[T]he students did not escape, but continued walking proudly with their uniform like the soldiers of Joshua and King David, who knew how to combine the book and the sword in the best and most genuine manner,” Rabbi Micha Kletzhandler, head of Bnei Akiva's Ohr Etzion Yeshiva and the army preparation high school, said, apparently failing to fully grasp the import of the fact that even the hasidic rebbe who treated them nicely refuses to allow his yeshiva students to serve in the IDF, and that the burden of defending Israel from attack has been and will probably continue to be carried by non-haredi Jews alone, while at the same time most haredim will continue to demand to be financially supported through state welfare payments and subsidies.

Hey, thanks for coming! Mind if we dump a load of dirty diapers on your heads? Students from the Bnei Akiva affiliated Ohr Etzion Zionist Orthodox army preparation high school were met with curses and dirty diapers when they visited the haredi Jerusalem neighborhood of Mea Shearim Thursday.