« Among The 26 Dead, At Least One Jewish Child | Main | New Jersey Pilot Program Allows Inmates To Participate In Lighting Of Menorah »

Neither myself or my source has been able to confirm the authenticity of the public notice, which is circulating on the Internet:

In order to keep the mitzvah of "Vehiyitem nekiyim" ('maintain innocence before God and Israel'), I hereby reveal to all that I have had no part in the 'mesirah' against R. Nechemia Weberman. To the contrary, I have done all I could and much more, as is known to the esteemed 'askanim', but have remained unsuccessful.

And [furthermore], this past week R. Nechemia sent me a direct notice through an emissary to say that he has no heavy heart and bears no grudge for he knows that I expended great efforts for his sake.

Written and signed with great pain for all that has occurred, may God have mercy on him and on us, and remove us from darkness to light with the coming of the Messiah, Amen.


I hereby affirm that I have been to see my friend R. Nechemia on Thursday 'Parshat Vayeitzei' [11/22/12] and spoke to him for many hours about the entire matter, and at the end he said to me, "Tell [victim's father] in my name that I know how much he suffers from the entire affair, I bear him no grudge and have no heavy heart against him, I know that he tried his best." 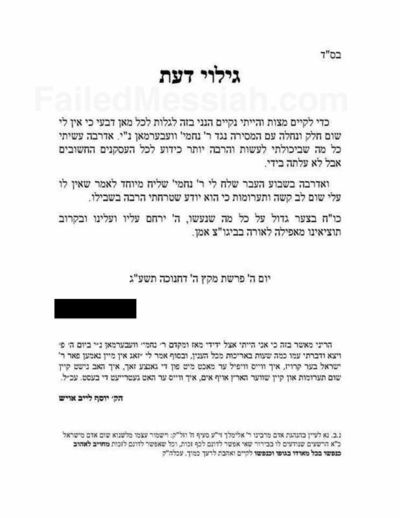