Rabbi Moshe Zigelman was serving an 18-month sentence for contempt of court for refusing to testify before a grand jury about Jews who conspired with Naftali Tzvi Weiz, The Spinka Rebbe, in a large money laundering and tax evasion scheme. Zigelman claimed that it was "mesira," informing, for him to testify. 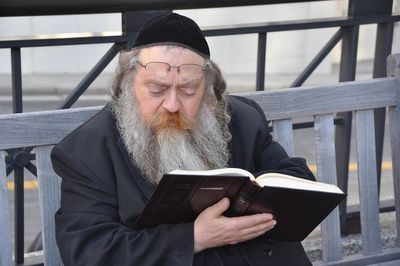 Judge Margaret Morrow found Rabbi Moshe Zigelman in civil contempt in December 2011, rejecting a defense attorney’s argument that sending the devout Hasid to prison would be futile because of the man’s beliefs. Citing the Jewish doctrine of mesira, which bars Jews from informing on other Jews to secular authorities, Zigelman’s attorneys argued that compelling him to testify would infringe on his 1st Amendment right to religious freedom.

Morrow ordered Zigelman, 65, released Monday after seven months in a Brooklyn lockup when a federal prosecutor agreed in court papers that “additional incarceration would be futile” in compelling the rabbi to testify.

Zigelman was called before the grand jury regarding an investigation into the Spinka sect, which was accused by federal authorities of soliciting tens of millions of dollars in contributions, only to secretly refund most of the sum to wealthy donors through international channels allowing them to claim large tax write-offs.

Zigelman, who was executive assistant to Grand Rabbi Naftali Tzi Weisz, pleaded guilty to one count of criminal conspiracy in 2008 and received a two-year sentence. At the time of his sentencing in 2009, prosecutors argued that Zigelman’s belief that "it is a sin to inform on a fellow Jew" made it difficult for authorities to detect and prosecute wrongdoing by members of the sect.

He was called before the grand jury in the summer of 2011 after serving that sentence. He was sent back to prison this May –- facing a maximum 18-month confinement –- for his refusal to testify.

The Times doesn't have the entire story, however, because Zigelman's attorney appears to have withheld some of it from them.

Zigelman has shamefully – and according to many poskim, against halakha – refused to testify in a criminal trial against people the US knows broke the law.

His religious claims have no merit in US (or international) law, and are obscene.

But as you can see from the following court documents, Zigelman has been ill for some time. He has to urinate through a catheter.

And it is difficult for him to travel in custody.

Because he has proven himself not be a flight risk – he was even allowed to travel previously to Israel on business twice and returned each time – the new judge in this case on Monday removed a warrant ordering his appearance in his court, replaced that warrant with a summons, and freed him so he can make the trip from New York to his Los Angeles courtroom in January.

Zigelman's legal entanglements are not yet over.

Here are the documents that explain the process that led up to this decision as PDF files:

Rabbi Moshe Zigelman was serving an 18-month sentence for contempt of court for refusing to testify before a grand jury about Jews who conspired with Naftali Tzvi Weiz, The Spinka Rebbe, in a large money laundering and tax evasion scheme. Zigelman claimed that it was "mesira," informing, for him to testify.