After unsuccessfully trying to sweep the allegations against Rabbi Chaim Halpern under the rug and then trying to form a special beit din headed by a known protector of pedophiles and sex offenders, Kedassia reportedly moves to have a more neutral beit din hear the case. Is this progress? 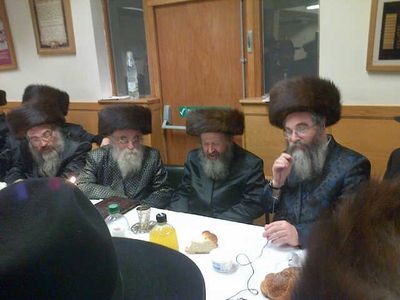 Bechadrei Charedim is reporting that after the Rabbi Chaim Halpern scandal refused to die – which means after Kedassia, the powerful haredi umbrella organization, was unable to sweep it under the rug – Kedassia’s plan to bring in a neutral beit din, religious court to judge the allegations against Halpern has moved forward.

Bechadrei Charedim notes that all three rabbis are considered neutral and do not tend to support any one faction.

It also reported that a private Jewish security firm was hired to prevent a scheduled demonstration against Halpern from forming outside Halpern’s home synagogue earlier this week.

Halpern has already resigned from all his public positions except for his position as rabbi of the synagogue located in his home, but it became clear those resignations were viewed by both Halpern and Kedassia as only temporary, meant to placate his accusers and their supporters.

That prompted a group of haredi rabbis from Golders Green to issue a letter saying Chaim Halpern was not fit to serve as a rabbi, and a demonstration was planned for Sunday evening outside Halpern’s home.

That demonstration was reportedly broken up by a Jewish security company hired by Halpern’s supporters.

Kedassia actions were allegedly at first geared to keeping Halpern’s accusers from coopering with police, but have broadened to include rebuffing the grassroots challenge against its own power.

Even so, Rabbi Padwa, Kedassia’s most senior rabbi, just spent a friendly Hanukkah evening with Halpern and his father Elchonon, sitting next to them at the head table in the elder Halpern’s home – even though Rabbi Elchonon Halpern has been his son’s chief defender and advocate. Padwa made no similar visit to the home of a victims’ advocate.

Even if the “neutral” beit din is seated, hears the case and finds Halpern guilty, there is no way for it to enforce its ruling. Kedassia can – and probably will – fail to enforce it, and even if it would somehow try to enforce it, it lacks the police powers to be able to do so.

Meanwhile, the victims of Rabbi Chaim Halpern are hasidic women living in closed communities. They don’t know the long history of rabbis mishandling sex abuse cases. Many do not have Internet access. They trust their rabbis and mistrust police.

This beit din, is almost certainly a beit din to nowhere.

And for a haredi Jew who has been sexually abused by a rabbi, that is the most one can reasonably expect a beit din to be.

After unsuccessfully trying to sweep the allegations against Rabbi Chaim Halpern under the rug and then trying to form a special beit din headed by a known protector of pedophiles and sex offenders, Kedassia reportedly moves to have a more neutral beit din hear the case. Is this progress?