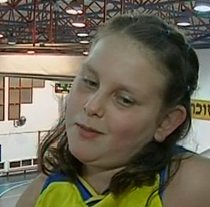 …The game took place last week between Elitzur Ra’anana [a Shabbat observant Orthodox team] against a team from the town of Alfei Menashe. The two teams were ready for the first tip-off when the coach of the Ra’anana team, who had travelled to Alfei Menashe, saw that the Alfei Menashe team had a girl playing on the team - a rosy-cheeked blonde ten-year-old named Shiran Grinbaum.

The Ra’anana coach stopped the game. No girls allowed, he said.

He explained that the game could not continue with Grinbaum on the court, as he was “forbidden to permit the children to play because they are religious boys who observe the prohibition against touching members of the opposite sex” he said, referring to the practice known as “Shomer Negiah,” in which adolescent and adult men and women refrain from any physical contact until marriage. It applied, he said, even though his players were only ten years old.

The Alfei Menashe coach refused to pull Shiran from the game. Following the confrontation, the Ra’anana team went home. Interviewed on television, Shiran said tearfully she was ‘very insulted’ that the game was called off because of her, and that she had cried when, in previous similar circumstances, she had been forced to sit on the bench. Her mother also went on camera, speaking out against the absurdity of these kinds of gender restrictions for children.

The Channel 10 report sparked outrage - particularly when it came to the technical results of the incident. According to Israel's Basketball Association rules, the technical victory of the game belonged to Ra’anana. Officially, Alfei Menashe would be penalized for refusing to pull Shiran from the game, while there were no consequences to Ra’anana’s refusal to play because of a girl’s participation.…

These are 10-year-old children!

Predictably, Israel erupted over this.

There are calls for the government to stop funding the Orthodox Elitzur league – which, of course, will never happen as long as Israel's right and center parties need Orthodox votes.

Israel's Minister of Sport is under pressure to do something. Chances are, she won't.

And so it goes in the Israel overwhelmingly founded by egalitarian Jews who were largely post-religion, an Israel that has long since been held hostage by a corrosive Orthodoxy of settlers and haredim, and Orthodoxy where black clad men spit on little girls and call them whores while 10-year-old boys in knitted kippas can't play a basketball game against a team with a lone 10-year-old female player.