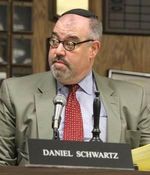 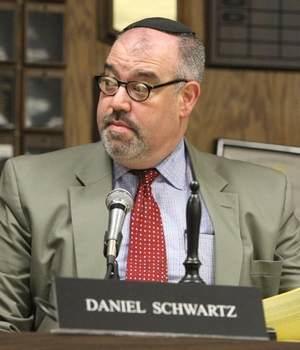 Haredi school board members have previously denied the allegations. School Board president Daniel Schwartz, an Orthodox Jew who affiliates with the haredi board majority, did not return Newsday’s call for comment Thursday. Neither did the schools’ Superintendent Joel Klein.

At a recent East Ramapo School Board meeting, President Daniel Schwartz was caught on video signaling a hasidic member of the board to leave, thereby causing the board to lose its quorum. That ended public comment – which was Schwartz's clear purpose – as a critic was pointing out a board failure.

On Friday, the state sent another letter to East Ramapo demanding answers regarding the district's $8 million budget shortfall. An earlier letter set a January 2nd deadline for East Ramapo to answer.

"Their response to the Jan. 2 deadline will be very telling. What’s clear is that they have work to do to ensure that they are complying with special-education law and fulfilling their obligation to meet the needs of the students in the district,” State Education Commissioner John King told Newsday, which also reported that the state appears poised to move toward taking over the district if East Ramapo officials continue to flout education law.

To deal with the current budget shortfall, the board is contemplating the elimination of kindergarten classes along with all elementary school art and music programs. But this year’s budget allocates about $7 million for purchasing special needs services from yeshivas and from out of district placements, including the Kiryas Joel School District, located in the all Satmar hasidic village of Kiryas Joel in neighboring Orange County.

The state has twice reviewed the district's special-education placement – in April 2010 and February 2012 – both times finding East Ramapo had failed to comply with state regulations and ordering corrective action that East Ramapo has apparently not taken.

The letter sent Wednesday by the state said East Ramapo has habitually placed students in Yiddish bilingual special education programs without proving that the students needed such a program. It also ordered East Ramapo to review all of its special-education placements for students in Yiddish programs and to submit a plan by May 31 for developing in-district programs that meet those students' needs – meaning East Ramapo would no longer send its haredi special education students to yeshivas to be educated.

Allegedly, hasidic students are often diagnosed with learning disabilities and related developmental disabilities that they do not really have. As the East Ramapo case could be showing, the diagnosis illegally brings millions of dollars of government money into hasidic yeshivas by artificially swelling the number of hasidic learning disabled students.

Whether the state has figured out this possible part of the East Ramapo puzzle or not remains to be seen.