New Study Shows YU Researcher, Others Appear To Have Cooked The Genetic Books To ‘Prove' Middle Eastern Origin Of The Jewish People When One May Not Really Exist

"The various groups of Jews in the world today do not share a common genetic origin. We are talking here about groups that are very heterogeneous and which are connected solely by religion…[the] genome of European Jews is a mosaic of ancient peoples and its origin is largely Khazar.” 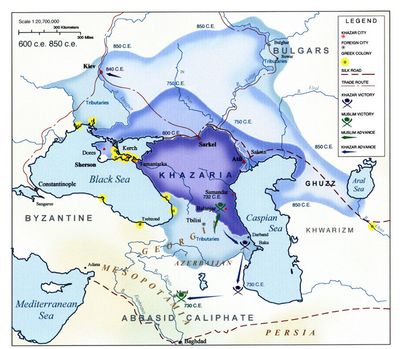 New Study Shows Yeshiva University Researcher, Others Appear To Have Cooked The Genetic Books To ‘Prove' Middle Eastern Origin Of The Jewish People When One May Not Really Exist
Shmarya Rosenberg • FailedMessiah.com

"My research refutes 40 years of genetic studies, all of which have assumed that the Jews constitute a group that is genetically isolated from other nations,” Dr. Eran Elhaik says.

Now Elhaik, in a study that is being called more profound than all of those that came before his combined, has exposed that fatal flaw and is the first to propose a viable way resolve those contradictions, Ha'aretz reports.

The answer to the origin of the Jewish people Elhaik found is startling – for most of us, out Jewish origins really do begin with the Khazars, the Medieval central Asian people whose ruling elite (and perhaps its merchant class, as well) converted to Judaism.

The 32-year-old does his work at the School of Public Health of Johns Hopkins University in Baltimore, Maryland. His study was published earlier this month as, The Missing Link of Jewish European Ancestry: Contrasting the Rhineland and the Khazarian Hypotheses, in the prestigious journal, Genome Biology and Evolution, which is published by Oxford University Press. This study is based on a complete analysis of the comprehensive genetic data published in preceding studies.

But in the absence of genetic data for the long-lost Khazars themselves, Elhaik uses a procedure often used by researchers in his field - he used data from populations that are genetically similar to the Khazars, including Georgians, Armenians and Caucasians, populations that Elhaik says have all come from the same genetic soup.

When doing so Elhaik discovered what he calls the Khazar component of European Jewry.

According to his study’s findings, the dominant element in the genetic makeup of European Jews is Khazar. Among Central European Jews, this makes up the largest part of their genome, 38%. For East European Jews it does the same, at 30%.

"[They are] primarily of Western European origin, which is rooted in the Roman Empire, and Middle Eastern origin, whose source is probably Mesopotamia, although it is possible that part of that component can be attributed to Israeli Jews,” he told Ha’aretz by phone from Maryland.

That possibility is important because, if it turns out to be true, it could connect European Jews to Israel. However, even if it is true, that connection is only a tiny part of the overall genome, a percentage so small that it would reportedly not be statistically significant enough to show that the origin of the Jews is the Kingdom of Judah in the biblical Land of Israel.

But Elhaik's study did find that there is a genetic continuum linking the Jews of Iran, the Caucasus, Azerbaijan and Georgia with the European Jews. These groups could share common ancestors - probably the Khazars.

Elhaik says that among the various groupings of European and non-European Jews there is no common genetic origin.

"The various groups of Jews in the world today do not share a common genetic origin. We are talking here about groups that are very heterogeneous and which are connected solely by religion…[the] genome of European Jews is a mosaic of ancient peoples and its origin is largely Khazar,” he told Ha’aretz.

But what about other much-publicized studies which claim to show common genetic descent for Jews?

Many of these papers and books were written by noted professors and published by respected academic journals and publishers – for example, for example, Oxford University Press published, "Legacy: A Genetic History of the Jewish People," by Yeshiva University’s Dr. Harry Ostrer, who teaches in the departments of pathology, genetics and pediatrics in the university's Albert Einstein College of Medicine. He argues that genetics prove the Jews are one people with a Middle Eastern origin.

Ostrer found no significant evidence for a connection between the Jews and the Khazars. According to Ostrer, genetically Jews are closer to Palestinians, Bedouin and Druze than to the Khazars.

How could Ostrer and so many others have reached conclusions that are co very different from Elhaik’s?

Simple, Elhaik says. First these researchers decided what conclusion they wanted to find, and then they set off to find evidence to support it.

“[Their research] has no empirical basis, sometimes even contradicts itself and offers conclusions that are simply not convincing…It is my impression that their results were written before they began the research. First they shot their arrow - and then they painted the bull's-eye around it,” Elhaik said.

"The majority of Jews do not have the Middle Eastern genetic component in the quantity we would expect to find if they were descendants of the Jews of antiquity,” he said.

To Elhaik, there is no uniquely Jewish gene because each human being is a genetic amalgam, and no population group has ever lived in total isolation from other population groups.

Haaretz says that it asked a number of scholars from Israel and the Diaspora – both historians and geneticists – what they thought about Elhaik’s article.

But every one of the geneticists Ha’aretz contacted also refused to comment.

Some ignored Haaretz’s request and never answered at all. Other geneticists claimed they were unfamiliar with population research and therefore could not answer. Still others claimed they lacked the time needed to answer the question.

The only scholar who answered Ha’aretz’s question was Tel Aviv University professor of history Shlomo Sand.

Sand wrote the book "The Invention of the Jewish People.” It has now been translated into 22 languages, despite what was until Elhaik’s work was published a stacked deck of genetic research that opposed it.

Sand has tough words for geneticists looking for Jewish genes.

"For an ignoramus like me, genetics had always appeared to be crowned with a halo - as a precise science that deals with quantitative findings and whose conclusions are irrefutable. [But] I discovered geneticists - Jewish geneticists - whose knowledge of history ended at what was necessary for their high-school matriculation exams. Which is how I would describe my knowledge of biology. In high school they had learned that there is one Jewish nation, and, on the basis of this historical narrative, they reconstruct their scholarly findings,” Sand told Ha’aretz.

But what really concerns Sand most is the misuse of genetics to characterize people or nations – something the Nazis did with glee and Sand rightly labels as “dangerous.”

“[I]n the past, anyone who defined the Jews as a race was vilified as an anti-Semite, today anyone who is unprepared to define them as a race is labeled an antisemite.

"I used to think that only in such disciplines as history and literature can facts be given various interpretations, but I then discovered that the same thing is done in genetics. It is very easy to showcase certain findings while marginalizing others and to present your study as scholarly research. In general, specialization in genetics can create an incredibly high level of ignorance in history,” Sand pointed out.

Posted at 01:01 AM in History, Science, Torah & Science | Permalink

New Study Shows YU Researcher, Others Appear To Have Cooked The Genetic Books To ‘Prove' Middle Eastern Origin Of The Jewish People When One May Not Really Exist

"The various groups of Jews in the world today do not share a common genetic origin. We are talking here about groups that are very heterogeneous and which are connected solely by religion…[the] genome of European Jews is a mosaic of ancient peoples and its origin is largely Khazar.”