More Jews In Israel Opt Not To Circumcise Their Sons

"It's the same as if someone would tell me 'it's our culture to cut off a finger when he is born,' People should see it as abuse because it is done to a baby without asking him." 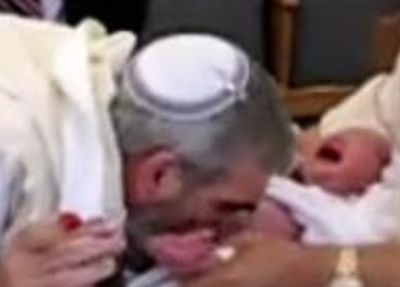 More Jews In Israel Opt Not To Circumcise Their Sons
Shmarya Rosenberg • FailedMessiah.com

More and more Jewish parents in Israel are saying no to circumcision.

Even so, across the spectrum of religious observance from haredi to completely secular, almost all Jewish baby boys born in Israel are circumcised.

But a small but ever increasing minority consider circumcision to be a form of abuse.

"It's the same as if someone would tell me 'it's our culture to cut off a finger when he is born,' People should see it as abuse because it is done to a baby without asking him," Rakefet Kaufman, an Israel woman who chose not have her infant son circumcised, told Reuters.

Gali, another young mother, found out she was pregnant with a baby boy. To her, it was obvious that he would be circumcised. But then a friend whose son was uncircumcised asked her why she was planning on circumcising her son.

"She asked me what my reason was for doing it, was it religious? I said no. Was it for health reasons? No. Social? No. Then it began to sink in. I began to read more about it, enter Internet forums, I began to realize that I cannot do it,” she told Reuters.

Ronit Tamir founded a support group for families who chose not to circumcise their sons.

"The phenomenon is growing, I have no doubt. When we started the group 12 years ago we had to work hard to find 40 families…They were keeping it secret and we had to promise them we'd keep it secret. Then, we'd get one or two phone calls a month. Nowadays I get dozens of emails and phone calls a month, hundreds a year.

"People are asking themselves what it means to be Jewish these days," she said.

"It is the covenant between us and God – a sign that one cannot deny and that Jews have kept even in times of persecution," a “well-known” mohel who requested anonymity told Reuters. He cited the biblical Book of Genesis, which quotes God as saying to Abraham, "And you shall circumcise the flesh of your foreskins; and it shall be a sign of the covenant between me and you.…And the uncircumcised male child whose flesh of his foreskin is not circumcised, that soul shall be cut off from his people; he has broken my covenant."

This is the covenant, the mohel said, that "keeps the people of Israel together."

"This edict is painful, irreversible and maims,” she said.

Gali agrees but still has one concern.

"The main issue which still troubles me a little is the social one, that one day he may come to me and say, 'Mom, why did you do that to me? They made fun of me today,’” she said.

Strikingly, Israel’s haredi-controlled Ministry of Health does not keep records on circumcisions, although estimates based on male live births in 2010 indicate that 60,000 to 70,000 and done in Israel each year.

The ministry reportedly says that it treats only about 70 cases per year of complications from circumcisions, mainly, it claims, minor complications like as excessive bleeding.

But there is no way to determine if this claim is true because there appears to be no enforced mandatory reporting of these circumcision-caused emergencies and illnesses.

More Jews In Israel Opt Not To Circumcise Their Sons

"It's the same as if someone would tell me 'it's our culture to cut off a finger when he is born,' People should see it as abuse because it is done to a baby without asking him."