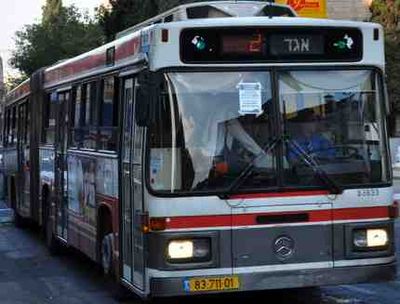 The Kadima political party alleged yesterday that the Egged bus company, which operates public buses in Jerusalem and surrounding areas along with more remote parts of the country, and the Dan bus company, which operates public buses in Tel Aviv and surrounding areas, refused to place their election campaign ads featuring slogans calling for haredi yeshiva students to serve in the Israeli military, Ynet reported.

According to Kadima, both bus companies demanded that the words "yeshiva students" be removed. The companies allegedly suggested an alternative tagline reading, "those who don't serve in the army."

"The bus companies have come out against IDF soldiers who bear the burden and endanger their lives on a daily basis for Israel's security. These companies take soldiers to their bases and back home. This constitutes a basis for a handsome profit made by their owners and now they are choosing to censor, for reasons warranting clarification, a national and idealistic message calling to compare the conditions of the serving soldiers who make a meager salary of NIS 350 a month to the yeshiva students, who enjoy a salary of NIS 3,400,” Kadima said in a statement.

Kadima insists that the bus companies launch its campaign immediately, just like it did with other political parties – including Shas ads that used the images of secular politicians and made it appear as if those secular politicians were supporting the haredi party.

Kadima warned that if Egged and Dan do not run its ads, Kadima will ask the Knesset's Central Elections Committee to remove the other political parties’ signs from the companies’ buses.

On Wednesday night, Kadima offered a new campaign with two additional messages: "Until there is an equal share of the burden, at least let there be monetary equality" and, "Mofaz is strong in security. He's one of us."

But Dan and Egged have so far not accepted those ads, either.

"We referred the matter to our legal department in order to make a fundamental decision on what is permitted and what is not. The pre-election atmosphere is likely to overflow and we service a heterogeneous public. We will safeguard democracy and our clientele as well. Kadima can relax. Whatever is permitted to others, will be permitted to them as well,” the Dan bus company said in response.

"Egged does not intend to allow various parties to use buses as a negative advertising platform [which would be] liable to cause resentment and discomfort to the users of its services. Kadima has the option of advertising a positive campaign, which emphasizes the party's advantages on the issues of security…,” Egged bus company spokesperson Ron Ratner responded.

Egged has previously refused to run ads from the religious freedom group Yisrael Hofsheet and went through an almost two-year period where it refused to run any ads that depicted women or girls, even if modestly dressed, even if only cartoon figures or only faces. The decisions were made to placate haredim who attack buses and passengers over ads they deem to be immodest.

Police enforcement of the law has been spotty at best, largely because Israel’s prime minister, Benjamin Netanyahu, has needed haredi votes for his coalition to remain in power.

Netanyahu – who in political and diplomatic circles is widely regarded as a disingenuous and dishonest man – has repeatedly tried to skirt or ignore High Court of Justice rulings mandating gender equality in public spaces like buses.