Rabbi Dov Lior is run out of town by Israeli soldiers stationed on the border with Gaza. 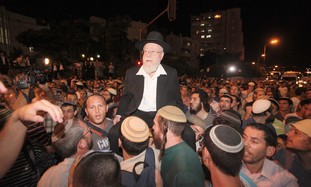 Rabbi Dov Lior on the shoulders of supports last year

Rabbi Dov Lior is the chief rabbi of the West Bank settlement of Kiryat Arba and the effective “chief rabbi” of the settler movement.

Lior is most known, however, for his support of Jewish terrorists and for his racism – including endorsing a book, Torat Hamelech, written by two rabbis, one of who is a Chabad hasid, that calls for the murder of Arab babies because they might grow up to be enemies of Jews.

Lior's son-in-law, Efraim Ben-Shachar, serves in an IDF reserve unit that was called up in the recent Gaza conflict and stationed at the border with Gaza.

During the week the unit was on the border, various artists and public figures visited the unit to show support for the troops and entertain them.

Seeing the success of these visits, Ynet reports that Ben-Shachar decided to ask his infamous father-in-law to come and speak to the unit.

But Lior’s visit did not go smoothly.

Some of Ben-Shachar’s fellow soldiers were outraged by Lior’s presence.

Omer Parter, an activist in the Working and Learning Youth movement, objected to Lior’s presence.

Lior indignantly asked him, "Am I not allowed to speak to the soldiers?"

Parter reportedly replied, "You are a persona non grata here."

Zionist Orthodox soldiers in the unit started to gather around Lior to hear him speak.

But Parter told his fellow soldiers that Lior was one of the rabbis who had endorsed the racist book Torat Hamelech. He and other soldiers used their smartphones to search for quotes from the book including its permission to kill Arab babies, "if it is clear that they will grow up to pose a threat to our nation."

Tensions rose as the soldiers searched out more quotes from the book and looked for proof of other Lior endorsements of racism and violence like his support for mass murderer Baruch Goldstein.

After a few minutes, Lior reportedly left quietly without giving his talk.

"I believe there is no room for Rabbi Lior's messages in the army. I oppose and condemn Rabbi Dov Lior's work and activities. I did stop him from speaking in light of his support for Baruch Goldstein and his conduct in the period before Rabin's murder. This is how I educate my pupils at the Working Youth – to love the land and practice equality, and not to hate anyone,” Parter told Ynet.

Lior’s son-in-law Ben-Shachar stressed that despite the confrontation, the diverse soldiers in his reserve unit get along well.

“In spite of the event, a beautiful social fabric has been created in the unit between different ends of the Israeli public. These are people who risk their lives, shoulder to shoulder, one for all and all for one, and for the entire people of Israel.…I have a lot of respect for the opinions of the fighters in our unit. These people are dear to me. We go back many years,” he told Ynet.

An associate of Lior claimed Parter’s actions had made no difference for another reason – in Lior’s mind, his visit was successful.

"One person was cheeky and shouted, but that did not affect the rabbi and his conversation with the soldiers,” Lior’s associate told Ynet.

Rabbi Dov Lior is run out of town by Israeli soldiers stationed on the border with Gaza.