Sholom Rubashkin, the son of Moshe Rubashkin and the nephew of the more well known Sholom Rubashkin of Agriprocessors infamy, violated his supervised release from federal prison and now must return to prison on January 3.

What did Sholom Rubashkin, "Jr." do wrong this time?

• He failed to complete his mandated 250 hours of community service, completing only 48 hours – many of them spent sitting in his car outside his mandated workplace and talking on his cellphone or using his laptop computer.

• He failed to show up for many scheduled mandatory visits with his probation officer.

• He disregarded many warnings from his probation officer regarding those missed visits and his failure to complete his community service requirement.

Sholom Rubashkin "Jr." was originally sentenced to six months in prison, a $5,000 fine and three years of supervised release that included a requirement for serving 250 hours of community service in Allentown, PA where his father Moshe once had a textile mill.

He was released from prison on November 12, 2009. His supervised release woul dhave ended earlier this month is he had completed his community service and fulfilled the other conditions of the release.

Sholom and his father Moshe abandoned the Allentown mill and failed to secure it, which was especially problematic because it bordered a residential neighborhood and was a danger to neighborhood children.

Left behind in the mill were hazardous chemicals the Rubashkins were mandated by federal law to properly secure or to dispose of properly.

Three fires were started at the mill.

All were almost certainly arson.

The third fire devastated the mill and exposed firefighters and neighbors to great hazard because of those chemicals the Rubashkin's illegally left behind.

Both Moshe Rubashkin and his son Sholom pleaded guilty to lesser charges – in Sholom, Jr.'s case to making a knowingly false statement to a federal investigator.

For part of the deception the Rubashkins tried to use against the city of Allentown and the federal government, Sholom Rubashkin, Jr. used the name "Sam Sternberg," apparently in homage to another Chabad fraudster with that last name.

For violating the terms of his supervised release Sholom Rubashkin, Jr. is headed back to prison for two months, probably to the Otisville complexes where his uncle Sholom is serving a 27-year-sentence for fraud. 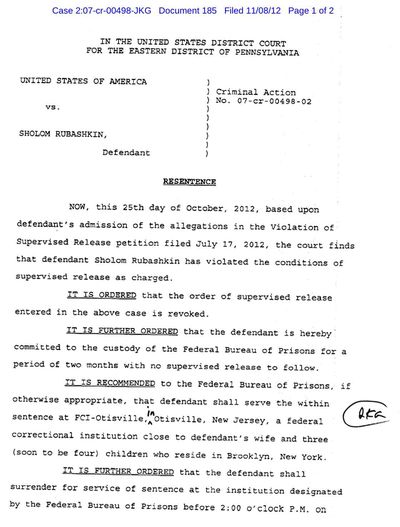 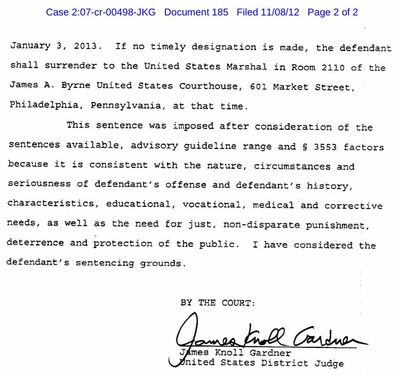 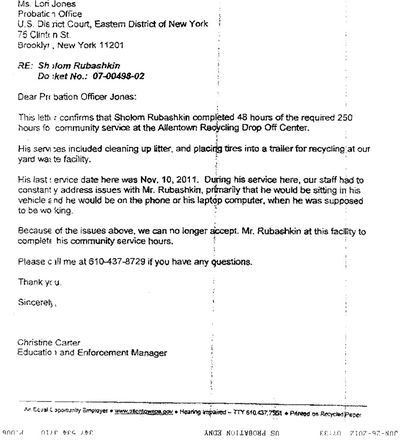 The entire probation report as a PDF file: