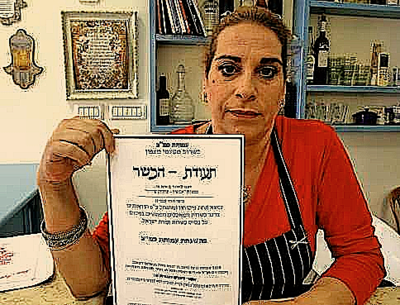 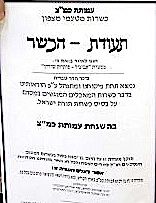 On Tuesday In Tiberias, just before Avigail Aharon was about to open her restaurant for the day, two uninvited guests arrived – representatives of Israel’s state-funded haredi-controlled Chief Rabbinate. The rabbis reportedly came to warn Aharon – threaten her, some would say.

"It's absurd, a real laughing stock. By law this is deceptive kashrut. Only those who hold a valid certificate from the local Rabbinate can declare a restaurant kosher. People are eating under a falsified certificate,” Rabbi Raphael Cohen, the Tiberas Rabbinate’s kosher supervision head told Ha’aretz.

"People realize that my kitchen is Glatt kosher, only I don't have a certificate from the rabbinate. Yet the fears that I would be harmed by the lack of a certificate proved unfounded. I have kipa-wearing diners who tell me they come because I display a kashrut certificate from conscience, and not that of the Rabbinate,” she told the paper.

Aharon is a 10th-generation Tiberias native. Her restaurant has been open for five months.

My restaurant’s cuisine is “Tiberian…[which] has been built up over 800 years and was influenced by the conquerors who ruled the city, the Arab population, Spanish and Greek influences, Maimonides' culinary doctrine and also the Ashkenazi cuisine brought by the Karlin-Stolin Hasidic dynasty in the 18th century.…every Tiberian grew up on a kosher kitchen and even today most are traditional. Our kosher kitchen has been passed from generation to generation according to the Torah of Israel, not the Torah of Rabbi Raphael. There is no doubt that my kitchen is kosher. Because of the accepted conventions and social pressure, I went to the Tiberias rabbinate” but felt alienated there, she told Ha’aretz.

Aharon told Ha’aretz that Cohen once found "regular" lettuce that was not approved by the rabbinate in the restaurant’s basement.

"It was lettuce that we'd bought to take home and kept in the basement until then. [Cohen] "left the basement victoriously and with the lettuce in his hands, and in front of all the diners, demanded I return the certificate. I was white with embarrassment," she said.

"She was storing downstairs lettuce suspected of being infested by worms. People trust our kashrut certificate,” Cohen told Ha’aretz.

The Chief Rabbinate effectively banned all “mehadrin kosher” “bug free” vegetables two weeks ago after an investigation by Israeli scientists and public heath officials showed they were poisoned by dangerously high levels of approved and non-approved pesticides, including some which have been linked to cancers.

Aharon says she does not need the Rabbinate’s kosher certificate.

When the Rabbinate’s threat became common knowledge earlier this week, many locals came to the restaurant to support Aharon’s decision to operate without the Rabbinate’s approval.

However, so far no other Tiberias restaurant owners are supporting her, although ten restaurants in and around the Machane Yehuda market in Jerusalem have also recently opted to throw out the Rabbinate’s rabbis and go it alone.

“I hope other [restaurant owners in Tiberas] will join [me],” Aharon reportedly said, “because no one has a monopoly on the religion."