Rabbi Chaim Halpern, a leading member of London’s haredi rabbinate, resigned this week from his position as a dayan, religious court judge, after being confronted about allegations of inappropriate conduct with a number of women. 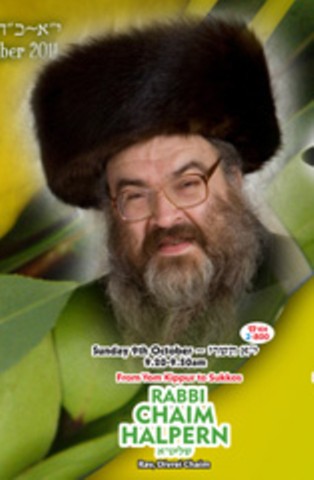 As you read the following piece from the Jewish Chronicle, please keep in mind these points:

1. The Jewish Chronicle fails to credit or link to the blogger, IfYouTickleUs, who posted Halpern's resignation letter.

2. The JC also errs by making it appear as if the rabbis acted only when they heard the women would go to police if the rabbis did not act. The truth is that police were already involved, and the investigation was not limited to Halpern's alleged abuse – it also included the rabbis' coverup and their obstruction of justice. The rabbis acted against Halpern in order to prevent the women from cooperating with police in the investigation against them and Halpern.

3. Halpern still has his own privately controlled synagogue based in his home and he also still gives lectures and teaches classes.

4. Forcing an abuser to leave a community or to restrict his public activities does nothing to stop abuse. Halpren can (and probably will) re-offend, either in London or elsewhere. The only thing that stops abusers from re-offending is prison. The time they're behind bars is time they cannot abuse women or children. But a rabbi who admits no wrong and who is not subject to the criminal justice system (and who has many supporters among the haredi population in London and elsewhere) is very likely to re-offend.

5. Allegations against Halpern are not all recent. Some date back many years, and the rabbis who, under duress, finally took action against Halpern allegedly knew about them for many years. What caused them to act was not concern for Halpern's victims or even to prevent other women from being victimized. It was to protect themselves from a police investigation.

A leading member of London’s strictly Orthodox rabbinate this week resigned as a dayan after being confronted over allegations of inappropriate conduct with a number of women.

Rabbi Chaim Halpern, who runs a shtibl (house synagogue) in Golders Green, announced that he was stepping down from “public positions”, which include his seat on the presiding rabbinate of the Union of Orthodox Hebrew Congregations.

The storm, which has been gathering around him for weeks, broke on Sunday after he attended a meeting at the home of former London Beth Din head Dayan Chanoch Ehrentreu, where six local rabbis examined the allegations.

The rabbis issued no public statement but a copy of Rabbi Halpern’s resignation letter, handwritten in Hebrew, surfaced on the internet on Tuesday.

I have decided to withdraw from public positions

In it, he said: “Since several complaints have arisen against me relating to marriage counselling, I have decided in my interest to withdraw from public positions beyond my beis hamedrash (synagogue).”

He hoped to continue teaching Torah.

Rabbi Halpern was unavailable for comment. But an associate of his said on Wednesday: “He strongly denies the allegations. He was left with no choice other than to resign following the meeting.”

Rabbi Halpern is the scion of one of the most influential rabbinic families in London’s strictly Orthodox community. His father, Rabbi Elchonon Halpern, is a long-standing president of the Union.

Apart from his official Union role, Rabbi Chaim Halpern held other communal positions. A newsletter to parents from Beis Yaakov Primary School, which had previously listed him on the letterhead as an education adviser, appeared on Tuesday without his name.

The Union had come under mounting pressure from several rabbis in Golders Green to take action over the allegations, which related to Rabbi Halpern’s counselling work.

A few days before Rosh Hashanah, an unsigned letter on behalf of a group calling itself “the committee of North-West London rabbis” was sent to the Union’s rabbinic head, Rabbi Ephraim Padwa.

It stated that one of the dayanim was “engaged in inappropriate conduct” with women.

The letter alleged that, several years ago, he had been warned about his activities by three senior rabbis from the community.

It warned: “The women say that if the rabbis don’t do anything… they will go to the police and there is no doubt the police will look into it.”

Rabbi Padwa was urged to ask “this person to remove himself from town without further delay”.

One of the rabbis, who approved the letter, said that “more than one rabbi agreed to it being sent”.

In the event, the initiative was finally taken by Dayan Ehrentreu, who convened a group of local rabbis on Sunday to hear evidence and question Rabbi Halpern.

No one was available from the Stamford Hill-based Union to comment.

But one member of the strictly Orthodox community in Golders Green predicted that there would be broader fallout from the episode.

“There is a complete split within Golders Green,” he said. “People no longer respect the Union rabbinate at all, they have lost credibility in north-west London. Things are going to have to change.”

Rabbi Chaim Halpern, a leading member of London’s haredi rabbinate, resigned this week from his position as a dayan, religious court judge, after being confronted about allegations of inappropriate conduct with a number of women.