Israel's war with Hamas in Gaza is caused by Israel's decision to draft haredim into the military, Rabbi Amnon Yitzhak claims, noting that his "prophesy" on the matter has now been fulfilled. 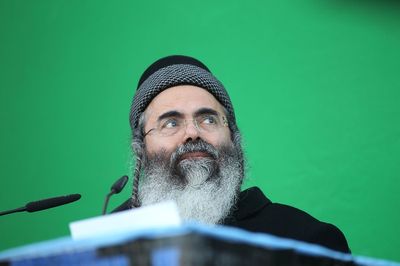 Rabbi Amnon Yitzhak is a prophet.

According to a report in the Jerusalem Post, that’s what the Yemenite kiruv rabbi and all around alleged huckster says about himself.

Yesterday Yitzhak claimed that a “prophecy” he made had come true with Israel’s defensive attack on Gaza.

Speaking in Tiberas in June, Yitzhak reportedly asserted that because Israel was trying to draft haredim, a war would break out between Israel and its enemies.

“God sits in heaven and plays with them, and laughs, ‘All of a sudden they’re going to be drafted, they’ll draft them, equality [in the military draft], equality.’ Don’t interfere with the apple of my eye. Those who study Torah are the apple of God’s eye, don’t interfere with them in case He does not remain silent.…now you’ll see, before they can agree on a new law, a war will break out, as always happens when people oppose those who observe the Torah and its commandments, and then you’ll remember what I said and see if it was true or not,” Yitzhak reportedly said.

“Less than three months after the rabbi spoke on this issue in Dimona, and after two weeks of [missile] barrages on the communities of the South, the Hamas Chief of Staff Ahmed Jabaari was eliminated. On the eve of the new month of Kislev, massive rocket fire was directed at Beersheba and southern Israel, and shortly after, it was decided to initiate Operation Pillar of Defense.”

Israel's war with Hamas in Gaza is caused by Israel's decision to draft haredim into the military, Rabbi Amnon Yitzhak claims, noting that his "prophesy" on the matter has now been fulfilled.