Extending the Tuition Assistance Program to religious institutions at a time aid to higher education students at secular institutions was being cut was very controversial. Now it turns out the first grouping of grants given to these religious institutions were given almost exclusively to haredi yeshivas – 32 out of 33 schools are haredi – and the state is unable to say in any detail if or how these yeshivas were evaluated and approved for the program. 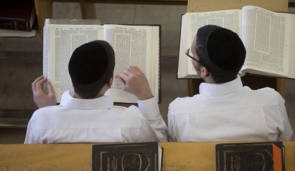 …Full-time degree program students at The State University of New York and The City University of New York received average grants of $2,500 and $3,400, respectively [from New York State’s Tuition Assistance Program (TAP)]. Yeshiva students were awarded an average of $2,250 for just half a year, meaning that they are likely to be awarded about $4,500 for a full year during the current academic cycle.

[New York State's Higher Education Services Corporation’s Director of Research Neal] Warren said that the discrepancy was “driven primarily by income.” The most likely reason that students in the yeshiva programs receive higher awards, he explained, is that they come from poorer families.…

…[Y]eshiva students are among the primary beneficiaries of federal Pell grants for theological students. A recent study by the Forward showed that yeshivas received 53% of the $84.5 million in Pell grant money that went to religious schools in 2010.

While HESC declined to release a breakdown of individual TAP awards to yeshivas, it is likely that [Satmar’s] United Talmudical Seminary, in Brooklyn and UTA Mesivta of Kiryas Joel — the largest religious Pell grant recipients in the state last year — took the largest share of New York’s TAP funds for religious schools.

Until New York’s eligibility rules were changed, all schools that received TAP grants had to be supervised by the state’s education department. Because yeshivas are not supervised by the department, HESC had to find other measures for such schools to qualify for TAP funds.

Kathy Crowder, an HESC spokeswoman, said that in order to receive TAP funds, theological students and their schools must be eligible for Pell funding. The students must also satisfy several additional requirements, such as meeting standards for satisfactory academic progress. The schools must be able to demonstrate adequate financial resources as well as adequate faculty and defined admissions requirements.

“Each school’s TAP certifying officer must certify that a student has met the statutory standards for satisfactory academic progress,” Crowder wrote in an email. “The Office of the New York State Comptroller reviews whether schools have properly certified students as part of an independent TAP audit.”

In a follow-up email, the Forward asked Crowder what a TAP “certifying officer” was, if this officer was a state employee or an employee of the school receiving the funds, and what, exactly, were the “statutory standards” the yeshivas must meet to show “satisfactory academic progress.” The Forward also asked whether the New York State Comptroller had, in fact, independently audited any of the yeshivas, and what those audits showed.

Crowder wrote back, on November 8, that because of “Hurricane Sandy and several other time-sensitive matters” HESC was unable to respond.

Like much of the Forward's reporting these days, this report lacks both context and depth.

Inclusion of yeshivas in TAP funding was reportedly in part a quid pro quo for haredi bloc votes, as was reported last year.

Satmar is the major beneficiary of TAP, yet its high school yeshivas produce hundreds of semi-literate and illiterate students every year, and its 'post-secondary' yeshivas are not much better. Satmar's yeshivas are notorious for not teaching New York State's core curriculum. And along with other hasidic schools, they're also notorious for scamming government programs like Pell Grants.

And then there's the little issue of the accrediting body that accredits thse haredi post-secondary schools. It's a haredi-founded and controlled body whose accreditation is almost worthless in terms of academics. But those haredi bloc votes were enough to get the Federal government to accept it, leading to a sad situation where a heavily disproportionate amount of Pell Grant money goes to yeshiva students – even though haredim ripped the Pell Grant program off for millions of dollars.

There was extensive reporting in 2010 and 2011 on extending the TAP program to cover yeshiva students. That reporting was not done by the Forward. None of it is cited in the Forward's current piece.

A problem with TAP the Forward does mention is that the yeshivas that get TAP funds are male-only schools, and they do not have parallel women's schools or co-ed schools. But that, too, was previously reported by others.

Here's a video from Investigate New York I posted more than a year ago that details many of the constitutional problems with yeshivas getting TAP funds. It will give you a good overview while showing you that the Forward's reporting is in part derivative:

Extending the Tuition Assistance Program to religious institutions at a time aid to higher education students at secular institutions was being cut was very controversial. Now it turns out the first grouping of grants given to these religious institutions were given almost exclusively to haredi yeshivas – 32 out of 33 schools are haredi – and the state is unable to say in any detail if or how these yeshivas were evaluated and approved for the program.