« Hospital Tries To Help Battered Hasidic Women | Main | Could The US Have Saved Tens Of Thousands Of Jews From The Holocaust? Maybe Not »

"As our City begins to recover from Hurricane Sandy, I wanted to share information about relief groups and other charitable organizations to which you can donate, if it’s difficult for you to personally offer supplies and shelter to people in need." 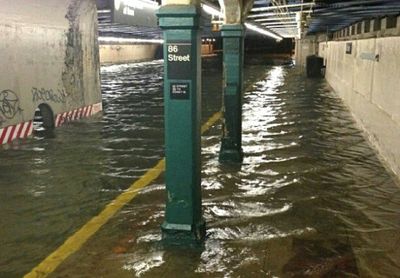 But in a city that has so many Jews, Jewish organizations are absent.

That isn't due to antisemitism or an oversight. It's because Jewish organizations do very little non-denominational work, and they do only a fair job of taking care of the poor Jews they claim to help, as I've documented many times previously.

As always, many Jews will donate to these non-denominational organizations and even to overtly Christian organizations because they want to help people in need, and they have no viable Jewish option to do that.

I've argued previously that among many other things the Jewish community needs but doesn't have because of the poverty of leadership that we have is a domestic version of American Jewish World Service.

Imagine the good the Jewish community could have done this week if we only had that.

As our City begins to recover from Hurricane Sandy, I wanted to share information about relief groups and other charitable organizations to which you can donate, if it’s difficult for you to personally offer supplies and shelter to people in need.

There are numerous ways to help here in the city, and a good place to start is by registering as a volunteer with NYCService’s Facebook page. The organization has asked people to contact NYC Service with their names, email contacts, and boroughs. You can also register to be a New York Cares volunteer and be part of their disaster response team.

The Food Bank for New York is also accepting donations and possibly volunteers. Check its websites for more information.

All of your donations to the Red Cross will provide shelter and other support to people who have been directly affected by the Hurricane.

To donate, visit www.redcross.org, call 800-Red-Cross or text the word "Redcross" to 90999 to make a $10 donation. Currently blood supplies are low in areas hit by the storm, and the Red Cross is asking people to schedule appointments to donate blood in the New York/New Jersey area. To donate, call 800-933-2566 or visit www.nybloodcenter.org.

There are scores of mobile feeding units and shelters up and down the East Coast operated by the Salvation Army, and they are serving thousands of people. You can also make a donation.

Feeding America is distributing water, food and supplies to thousands of people in the storm’s disaster zones. To donate, visit www.feedingamerica.org or call 800-910-5524.

AmeriCares is delivering medicine and other supplies to people affected by the storm. To donate, visit www.americares.org.

Personal hygiene items and food kits are being provided to thousands by World Vision. To donate, visit www.worldvision.org.

REACHING OUT TO CHILDREN IN NEED

Save the Children provides emergency aid to families and addresses the special needs of their children. You can visit www.savethechildren.org to donate. World Vision and Samaritan’s Purse are also providing emergency relief and seeking volunteers for children.

HELPING ANIMALS CAUGHT IN THE STORM

If you’re interested in helping animals find safe haven and good care after the hurricane, the Humane Society of the United States and the American Humane Association have teams working on the problem and they need your help. Donations are especially needed to help rescue stranded pets and aid animals currently in shelters.

CLEANING UP AFTER THE HURRICANE

Remember that Hurricane Sandy devastated the Caribbean and claimed many lives before it hit the United States. Operation USA and the International Medical Corps are aiding those affected by Sandy in Haiti and Cuba. Operation USA is also providing aid to the East Coast.

FEMA AND THE FEDERAL GOVERNMENT

Finally, FEMA, the Federal Emergency Management Agency offers a range of programs delivering aid to those affected directly by the hurricane. Check out the FEMA website for information and ways to help.

This evening NBC will broadcast a telethon to benefit those impacted by Sandy, starring Bruce Springsteen, Jon Bon Jovi, Billy Joel and other performers. On Monday, ABC will observe “A Day of Giving” on several shows to generate donations. Check both stations for more details.

BEFORE YOU MAKE A DONATION

If you are planning to give to a nonprofit in the wake of any disaster, you should first verify that it is legitimate. Charity evaluators like Guidestar and Charity Navigator as well as FEMA can help you determine whether the organization to which you’re donating has a good track record, and that funds will go where you intend.

IMPORTANT NOTE: Donations will not result in preferential treatment by City officials.

Update 5:58 PM CDT – There are a number of Jewish organizations involved in relief on an ad hoc basis.

The JTA reports that Minnesota based Nechama, which does disaster relief, arrived in NYC with fully equipped trailers to help with clean up and utility repairs. (Vic Rosenthal, the head of Nechama is one of those supposedly evil liberal Jews who in Chabad mythology "set up" Sholom Rubashkin. Of course, he did nothing of the kind.)

And, as the JTA reports, that isn't all:

Shelly Fine went to sleep Tuesday night, he posted his contact information and an appeal seeking volunteers for the Hurricane Sandy relief effort on a popular Upper West Side blog.

When the 63-year-old woke up the next morning, he had 163 responses. Together with other volunteers, Fine is helping to orchestrate a grassroots effort to help out at the city’s local shelters.

“The response of the Jewish community up here has been amazing,” Fine told JTA. “Synagogues, organizations and individuals — everyone has been coming out to volunteer. We’ve been sending people with medical training around to the evacuation sites to make sure everyone is OK, people are showing up and handing out cooked food, fresh clothing and games for children.”

Fine is just one of a number of Jewish volunteers stepping up to bring relief to New Yorkers affected by Hurricane Sandy. Tens of thousands of residents across the five boroughs still have no heat and electricity after the storm ripped through the city earlier this week, tearing down trees, homes and power lines. Many residents evacuated to local shelters or, stuck inside their homes, were relying on volunteers to bring them food and supplies.

Uri L’Tzedek, an Orthodox social justice organization, hit the streets of New York City Wednesday to hand out food and supplies to those in need. After placing an announcement on Twitter and Facebook, some 45 volunteers showed up to distribute candles, batteries, flashlights, water and food.

“We brought just about every flashlight we could find, and eventually just stood on street corners and handed out water to anyone who needed,” said Uri L’Tzedek’s Yael Keller. “A lot of people approached us telling us about elderly people stuck on higher floors who needed company and supplies. We climbed stairs.”

In Brooklyn, Masbia, a network of kosher soup kitchens serving that usually provides 500 meals a day, has been making more than four times that number since the storm. The organization originally prepared to close its facilities ahead of the storm since many employees live in affected neighborhoods. But Masbia’s executive director, Alexander Rapaport, told JTA that after receiving several calls from shelters in need of food, he gathered a team of volunteers and has been working around the clock to provide meals to thousands of people in three public shelters in Brooklyn and Queens.

“We’ve been sending most of our meals to the seniors evacuated to Park Slope Armory, which is part of the government’s evacuation plan,” Rapaport said. “There were hundreds of people being bused in, on stretchers and in wheelchairs.…"…

Again, these are largely ad hoc efforts that are almost all volunteer driven.

I'd also note that in many cases, the more non-sectarian the efforts appear to be, the less involvement there is of official Jewish organizations. (The Federation was busy distributing challahs for Shabbat, for example. That tens of thousands of people lacked food, water, shelter and basic personal care items seemed to escape Federation leaders.)

And if Federation fundraisers would take a minute to think about this, they'd realize how bad that is for their future.

"As our City begins to recover from Hurricane Sandy, I wanted to share information about relief groups and other charitable organizations to which you can donate, if it’s difficult for you to personally offer supplies and shelter to people in need."