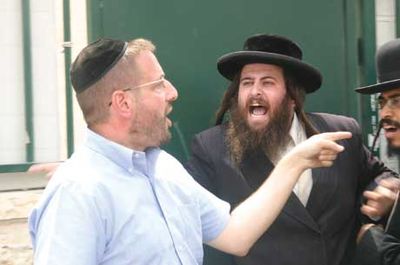 Above right, Rabbi Dov Lipman; above center, leader of haredi violence against women and girls yells at Lipman in September 2011 in Beit Shemesh

Lipman, who made aliyah eight years ago, is a left wing American haredi who rose to national prominence when helped lead the fight against haredi attacks on women and girls in Beit Shemesh last year. He is graduate of both Ner Yisroel Yeshiva and Johns Hopkins University.

Lipman originally joined Rabbi Chaim Amsellem’s Am Shalem party when it formed last year after Amsellem left Shas but switched to supporting Lapid after Amsellem decided to focus on the Sefardi vote.

“The past few years have exposed me to issues within Israeli society which I have dedicated myself to trying to improve – polarization, extremism, inequality and unfairness. As an educator I have been troubled by the direction in which we have been heading in our education system. I am proud to be part of a party which has raised these issues as its flags…I have had the honor of spending significant time with members of the Yesh Atid list in recent weeks. It is a remarkable group of men and women – some who have dedicated their lives to Israel’s security, some to education, some to discrimination and human rights,” Lipman reportedly said during his announcement tonight.