« Did English Rabbis Ask An Israeli Haredi Leader What They Should Do With An Alleged Sexual Abuser Who Is A Haredi Community Leader? | Main | Bolivian Prosecutor Still Suspects Haredi Businessman Of Involvement In Laundering Drug Money, Despite Arrests »

Indicted Molester In Chabad Pedophilia Scandal To Be Married Next Week 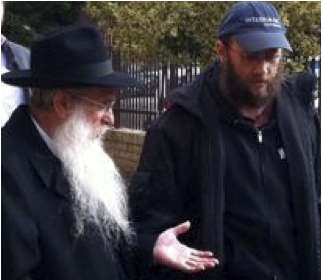 …David Cyprys, and he is marrying Michelle Coleman, his live-in girlfriend/common-law wife, next Thursday in Melbourne. Coleman is the former executive director of the Jewish Community Council of Victoria (Melbourne) who has been criticized by alleged victims and activists for her failure to take concrete steps to combat pedophilia. She has, I believe, several children. At least one of them is a special needs child.

Cyprys is a convicted child molester who got a very light sentence (not much more than a parking ticket) after prominent community members vouched for him with the judge. The head of Chabad in Australia, Rabbi Yitzchok Dovid Groner, protected Cyprys and kept him employed – at Chabad's boy's grade school / high school complex, Yeshivah Centre.

Cyprys served as the center's head of security and had keys to the entire building and therefore the ability to be alone with children in dark places.

Cyprys used that access and the access he got from serving as the school's part-time self defense / martial arts teacher to allegedly rape and abuse at least 11 more children.

Cyprys has been indicted for those alleged crimes. His trial is scheduled to take place next year.

Another convicted pedophile, David Kramer, is about to be extradited from the US to Melbourne to stand trial for child rapes and abuse he allegedly committed while teaching at Chabad's Yeshivah Centre. Rabbi Groner allegedly helped Kramer flee Australia when parents of his alleged victims got too hot for Groner to handle. He went on to live in Israel and the US, and was convicted of child rape in St. Louis and sentenced to seven years in prison.

Indicted Molester In Chabad Pedophilia Scandal To Be Married Next Week