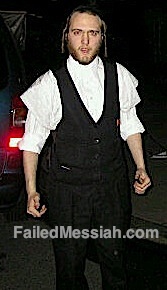 The New York Daily News reports that Joseph Fried – one of the four men arrested yesterday for illegally taking pictures in court of the alleged victim as she testified in the criminal trial of accused hasidic rapist Rabbi Nechemya Weberman – is the publisher/editor of the Twitter feed Satmar Headquarters. He also works as a journalist, most likely for one of the Yiddish papers Satmar controls.

But Fried is more than a haredi Twitter enthusiast and Yiddish journalist.

FailedMessiah.com has been told that Fried is a member of the Williamsburg anti-eruv committee, which is known for occasionally physically attacking hasidic Jews who rely on the Williamsburg eruv and push baby strollers or carry books and other items on Williamsburg streets on Shabbat.

But Yosele Fried is even more than that.

FailedMessiah.com was also told that Fried is a member of Williamsburg's Va'ad Hatznius, the hasidic modesty squad Weberman helps lead. The Va'ad Hatznius enforces its version of modesty, sometimes through use of violence and extortion, forcing store owners to stop carrying women's stockings that are the wrong color or too thin, banning denim skirts and immodest wigs, terrorizing women (and sometimes men) who reject its views.

And that puts Fried's actions in court yesterday and Wednesday in a much more ominous light.

This is a picture of Joseph "Yosele" Fried posing in front of pro-eruv posters he allegedly tore down in Williamsburg on June 28, 2009: