As I noted several times previously, courts cannot determine what is and what is not kosher. Only Jews – in most cases, rabbis – can do this.

And as long as a rabbi says a product is kosher, no fraud has been committed – except perhaps if it can be proved that this rabbi is flagrantly disregarding accepted Jewish law.

But as I made clear earlier, the class action suit doesn't come close to meeting that bar.

And if the court allows this amicus brief to be filed, it will be nearly impossible for that bar to ever be met. 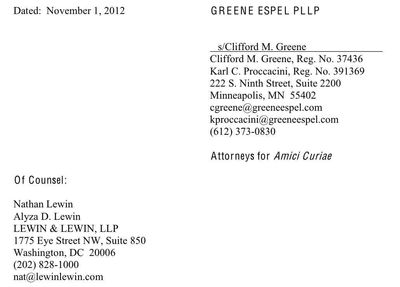 The memorandum mentioned in the above motion is attached below as a PDF file. But the money quote from it is this:

3.    The amici take no position regarding the underlying facts alleged in the plaintiffs’ complaint. They seek to address only the narrow question of whether, as a matter of established law, the Court may entertain and resolve the religious controversies necessarily raised by the plaintiffs’ complaint.
4.    The amici wish to help the Court understand and appreciate the unique context and widespread implications of the issues raised in this matter. The plaintiffs seek a ruling by the Court that certain products were not “100% Kosher.” Such a ruling would require the Court to delve into, and resolve, religious controversies including whether particular practices are required under religious law and doctrine. The principles of religious liberty in enshrined in the First Amendment militate strongly against such an inquiry by a civil court.

The entire memorandum as a PDF file: