A previously unknown group of haredi “extremists” blames the alleged “desecration of graves in Ramle” by archaeologists for the hundreds of missiles fired at Israeli cities and towns by Hamas and other Palestinian factions in Gaza. 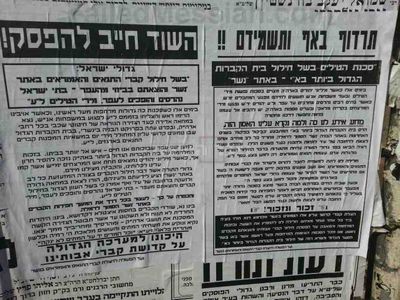 The Jerusalem Post reports that a previously unknown group of haredi “extremists” blames the alleged “desecration of graves in Ramle” by archaeologists for the hundreds of missiles fired at Israeli cities and towns by Hamas and other Palestinian factions in Gaza.

Committee for Activities for the Rescue of the Graves of the Mishnaic and Talmudic sages of Nesher posted pashkvils (wall posters) in the haredi city of Bnei Brak blaming the attacks on the “desecration” of “Israel’s largest cemetery.”

The posters claim “gedolei yisrael,” senior haredi rabbinic leaders, endorse the group’s message. However, the posters are not signed by any rabbis and none are mentioned by name.

The gedolim “are not afraid to put their names on proclamations…any poster on which the author is afraid to put his name and on which no names of gedolim are written” should not be taken seriously, and most haredim know that, Pappenheim told the Post.

However, Eidah Charedis and other known “extremist” haredi groups did not condemn the posters or publicly distance themselves from them.

Atra Kadisha, the official haredi organization that seeks to protect “Jewish graves” from “desecration” – but which often ends up rioting over graves of Crusaders or Canaanites – has frequently used violence in bids to stop supposed “desecrations,” including rioting to stop construction of the new bombproof emergency room in Ashkelon’s Barzilai Medical Center hospital.

Atra Kadisha was recently challenged by an upstart haredi group affiliated with some of the gedolim that used to support Atra Kadisha. The split was in part about tactics and in part a reflection of the then ongoing battle for leadership of the haredi community.

The excavations in a Nesher cement company quarry near Ramle began several years ago and are being carried out by archeologists from the University of Haifa.

The university told the Post that a “few dozen burial caves have been revealed” at Nesher’s quarry “so far in what seems to be a Second Temple Period graveyard.”

Archeologists work under the supervision of the Israel Antiquities Authority and follow established protocols.

Despite haredi claims to the contrary, Jewish law allows for graves to be carefully moved if a pressing need arises that justifies it.

Israel is such a small country which has been populated for tens of thousands of years, and graves or grave remnants are found almost everywhere.

Indeed, graves have been moved in the past to allow haredi building projects to go forward.

But when the need to relocate graves is secular rather than religious, haredim almost always fight the relocations and attack the “desecration.”

This is what happened with Ashkelon’s Barzilai hospital hardened emergency room. Haredim protested, rioted and vandalized the site, delaying construction by years.

Ashkelon was under heavy missile fire from Gaza until yesterday’s ceasefire took hold.

A previously unknown group of haredi “extremists” blames the alleged “desecration of graves in Ramle” by archaeologists for the hundreds of missiles fired at Israeli cities and towns by Hamas and other Palestinian factions in Gaza.