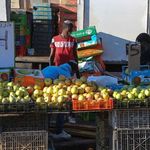 Ethiopian Jewish children as young as 10-years-old are skipping school to work illegally in the city's open air market. They're paid much less than minimum wage, and sometimes work the whole day for a half empty box of leftover fruits and vegetables to help feed their families. 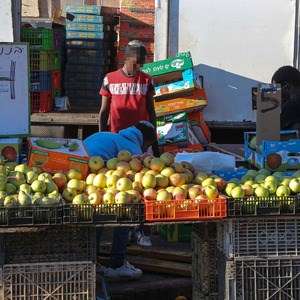 Exploitation In Sefat: Ethiopian Children As Young As 10 Skip School To Work In City Market For Leftovers
Shmarya Rosenberg • FailedMessiah.com

Vendors in Sefat’s city market are reportedly breaking Israel’s child labor laws by illegally employing Ethiopian Jewish children as young as 10-years-old who live with their families in absorption centers in the city.

The children skip school. They aren’t paid by direct bank deposit or check for their day of hard labor. Most aren’t even paid in cash.

Instead, a stunning report by Walla News finds that these children are often ‘paid’ primarily (and sometimes exclusively) with leftover fruit and vegetables.

A significant number of Ethiopian Jewish children and teenagers reportedly regularly skip school or drop out entirely. They wander Sefat’s streets, and work in the municipal market when it is held one day each week.

The Jewish Agency, which is responsible for the absorption centers most of these children live in, has begun to send a team on surprise inspection visits to, as Wall puts it, catch the children “in the act.”

Residents in several cities in northern Israel are now accustomed to the sight of young Ethiopian Jewish children working in these open air markets, "temporary" workers for vendors who hire them to keep their labor costs low. The children get up early as if going to school, but slip away without being noticed and head to the market.

"They became black workers," one of the Jewish Agency counselors dejectedly told Walla News in what is at once a touching and remarkably racist statement.

"We stage surprise visits to remove them by force from the market, but they come back,” she said, noting that vendors take advantage of the innocence and naiveté of the immigrant children.

"They are paid a pittance. It pains my heart to see how they are treated. Besides the fact that they must not employ them, the vendors pay them a few dollars an hour, and then send them [home] with a bag of rotten vegetables."

There are three absorption centers in Sefat. Two are located in the Canaan neighborhood, and one is in the city’s southern IDF 9 neighborhood. One thousand new immigrants live in them during their first two years in the country.

Most of the adult immigrants have difficulty learning Hebrew, even though ulpan classes that teach it are held inside each of the absorption centers. Along with adapting to life in a first world country and the overwhelming tasks of learning Hebrew and navigating Israel’s bureaucracies, these busy and overwhelmed newcomers also have to adhere to the demanding requirements of the conversion process all Falash Mura are required to follow, as well as fulfill other religious duties.

And even though they have help from Jewish Agency professionals and volunteers, parents are often overwhelmed and distracted.

“Parents are unable to control the children who run away to work in the market," a Sefat resident named Joseph told Walla News. "Every Wednesday I try to talk to those children, and explain to them that they are hurting themselves. It’s very serious, they do not come to school, and instead go to work. Their parents gave up on them."

The vendors don’t see themselves as exploiting or hurting the children.

"They are harassing us and begging us to employ them," a vendor told Walla. "I do not want the picture that paints itself here [to show that] we abuse them. I treat them very well, taking care to make sure that they eat and drink. I don’t have to do that, but my heart aches when they tell us that they do not have enough money to buy a [slice of] pizza.”

“No one ever came to me from the parents of the children who work for me and asked me if I have a job for his son,” another vendor said. “I just wanted to help the family. Late in the day, I sent the boy [home] with fruits and vegetables."

"I do not understand what the fuss is about,” a regular market shopper added. “[The children] just want a little pocket money, rather than to steal or rob [to get what they need]. They work very hard for the money."

"The [Jewish] Agency must use a stiff hand against these employers,” he said. “I assume that these families are in financial distress and cannot afford to meet all the needs of their children. This creates a problematic situation, where the children go out to support themselves. I condemn those employers who exploit the fact that these are new immigrants. I want to see those employers look me in the eye and tell me that they agree to allow their own sons to be employed under these conditions,” Dasa said.

"The Jewish Agency is strongly opposed to cases of employment of minors in violation of the law and cases of child labor [involving] immigrants from Ethiopia in particular,” the Agency said in a statement. “Employing children in the market is an offense and we condemn it strongly. We make concerted efforts to combat the phenomenon, and we call on those mandated by law to take immediate action to [enforce the law and] eliminate it. As soon as the Jewish Agency found out about cases where immigrant children were illegally employed in the market, we worked to combat the problem by appealing to the City of Sefat [to enforce the law], by having absorption center staff work with representatives of the schools to ensure the presence of students in classrooms, and by providing information to parents and children in order to create awareness of the issue and to prevent recurrence. In addition, absorption center teams monitor the situation closely, and they frequently visit the market to ensure that children are not employed there.”

“Absorption center directors, please contact us this week [so we can] help you eradicate this phenomenon,” the city responded after being confronted about the issue by Walla News. “The head of the municipality is concerned and wants the Division of Municipal Inspectors and the Israeli Police to do everything in their power against the offending vendors. However, major work also needs to be done along with the absorption centers’ staffs to publicize among the immigrant families that this disturbing phenomenon of small children who leave their families in the morning and go down to the market is happening [and that it must be stopped].”

Ethiopian Jewish children as young as 10-years-old are skipping school to work illegally in the city's open air market. They're paid much less than minimum wage, and sometimes work the whole day for a half empty box of leftover fruits and vegetables to help feed their families.