The demonstration is sponsored by the Yerushalmim movement, which includes Orthodox, non-Orthodox and secular members, and is backed by Orthodox rabbi and rosh yeshiva Aaron Leibowitz. 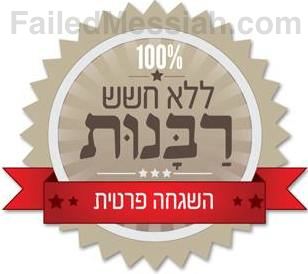 An Orthodox rabbi from Jerusalem, Aaron Leibowitz, has thrown his support behind a group of cafés and restaurants in the capital that have decided they no longer want the haredi-controlled state rabbinate’s kosher supervision, but still advertise as kosher eateries, Ha’aretz reports.

Leibowitz also recently launched a pilot project to give free kosher supervision to a café in downtown Jerusalem.

Six rabbinical students from Leibowitz's yeshiva have volunteered to be the café’s kosher supervisors at no charge. And the kitchen will be open for anyone, including customers, who wants to inspect it.

Later today, Lebowitz will be part of the first ever demonstration against the official state Jerusalem Rabbinate. The demonstration is sponsored by the Yerushalmim movement, which includes Orthodox, non-Orthodox and secular members, and will protest the state Rabbinate’s kosher supervision monopoly.

The state Rabbinate is battling a growing trend among Jerusalem restaurants to advertise themselves as kosher even though they do not have official kosher certificates from the Rabbinate.

The Rabbinate claims this violate the truth in advertising laws - even when the food served is absolutely kosher, and even if the kosher claim is made by a blog or a newspaper but not by the restaurants themselves.

Israeli law says that no business may present itself in writing (a sign, a blog post, a website, an advertisement, a flyer, etc.) as kosher unless it is under the Rabbinate’s supervision – even if it has private kosher supervision from Orthodox or haredi rabbis.

But the same is not true when it comes to non-haredim.

Rabbinate kosher inspectors recently visited these non-compliant non-haredi restaurants and warned the owners they were violating the law and threatened to fine them.

One restaurant, Azura, has already been fined 1,000 shekels for calling itself as kosher on its website.

The Rabbinate also claims that owners may not verbally tell customers that the restaurant is kosher. But while dissidents agree that Israeli law bans calling these non-supervised restaurants kosher in writing, they dispute the Rabbinate’s claim that the law forbids speech.

Today’s demonstration will be held in the Rehavia neighborhood of Jerusalem this afternoon.

The demonstration is sponsored by the Yerushalmim movement, which includes Orthodox, non-Orthodox and secular members, and is backed by Orthodox rabbi and rosh yeshiva Aaron Leibowitz.