A Lesson From The Storm

What can we learn from the massive natural disaster that ravaged New York City and New Jersey along with many other East Coast locations after Hurricane Sandy struck? 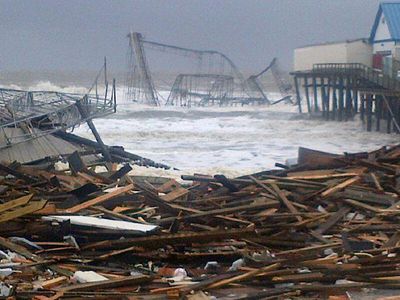 One of the new facts of life in the aftermath of Hurricane Sandy is that tens of thousands of people are now reliant on some form of assistance, be that help from FEMA or the Red Cross or from smaller local organizations like churches and synagogues.

People who never before had to ask for or accept charity now are forced by circumstances to stand in lines at ad hoc soup kitchens and sleep at the homes of family, friends or even strangers or shelters while some form of temporary housing is found for them.

In some ways, they are now living the lives of America's poorest citizens, never knowing if they will have  a roof over their heads tomorrow or food to eat.

The very poor and homeless we are used to seeing are often mentally ill or drug addicted, and it is easy for us to blame their poverty on their own behavior or on being crazy.

But what we don't see are the thousands of very poor Americans who have been priced out of the housing market and who sleep in shelters or on friends' couches, go to work at low paying jobs with no benefits, and who rush back to those shelters before their early evening closing, often hungry, just so that they don't get locked out.

We don't see the the very poor who became impoverished because of a severe illness, who had to choose between getting a very ill child to regular therapy appointments and their jobs.

We don't see the families, ravaged by job loss, job erosion and by employers who cut or eliminate employee benefits, often by cutting employees' hours to just below the full time threshold, families whose regular dinners consist of ramen soup and whose breakfasts are often nonexistent.

As horrible as it is right now in some Jewish areas of New York City, just blocks away outside them it is often far worse, because these already poor communities lack the financial resources and fundraising expertise to supplement the assistance the government can give.

There are many lessons we can learn from Hurricane Sandy about disaster relief and New York City's infrastructure and its ability (or its lack there of) to help those in need quickly enough.

But a lesson we can all learn, especially those of us who were unfortunately directly impacted by the storm, is that poverty and all the suffering that comes with it can strike us – or anyone – in a heartbeat, and as much as we may suffer, it often seems as if no one outside of our fellow sufferers really cares.

America's social safety net is set too low and too narrow. It punishes people for being poor rather than stabilize them and give them the help and guidance to try to become self-reliant again.

No one should have to choose between having enough food to eat and paying their rent or buying their doctor-prescribed medicines.

No one should have to choose between caring for a sick child or spouse or their job or their home.

As the rain and snow of this latest Nor'easter blankets New York and New Jersey and momentarily covers the damage Hurricane Sandy left behind, take a moment to think about those Americans who became poor through no fault of their own, as if a hurricane or Nor'easter struck them, but no one else would see or help.

In this sad and horrific moment, all of you know someone who is suddenly poor, someone whose life has been devastated.

If that person isn't you it easily could have been you.

A Lesson From The Storm

What can we learn from the massive natural disaster that ravaged New York City and New Jersey along with many other East Coast locations after Hurricane Sandy struck?