« Pinto Bribery And Money Laundering Case May Only Be The Tip Of The Iceberg | Main | IDF To Send 15,000 Draft Notices To Haredim »

Chabadniks are complaining the arrest (please see the video posted below) of a homeless man sleeping in the Aliyah Center for "at risk" "troubled" youth in Crown Heights is police brutality. But is it? 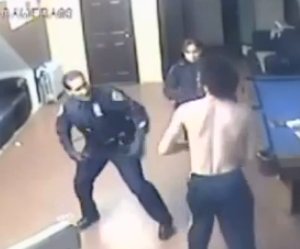 I don't think so.

The man, Ehud HaLevi, clearly resists arrest and tries to "chestbutt" an officer. (You'll see that in the video posted below.)

Crown Heights dot info reports that HaLevi had permission to be sleeping there and had been doing so for more than a month. They also report that it is unclear who called police.

This is how Crown Heights dot info describes the incident. HaLevi tells police he has permission to sleep there and offers to prove it. Then:

…When he resisted arrest, the male officer flew into a rage and began to beat the defenseless man. As can be seen in the video below, the officer assumed a boxing stance and then lurched towards his victim, pummeling him from all sides.

Over the next couple of minutes the man is also pepper-sprayed and beaten with a truncheon by the female officer, all while posing no threat to the officers’ well-being whatsoever.

After a good two minutes of sadistic thrashing, the officers are joined by a squadron of their peers, and successfully put him in handcuffs and under arrest.

…the man is being charged with assault on a police officer(!) - a felony - which can bring a sentence of 5 years in prison upon conviction.

He is also facing four Misdemeanor charges and four violations, including trespassing, resisting arrest and harassment.

He has been released on bail.

Unfortunately for HaLevi, the minute a person fails to heed a command from a police officer he become a much greater risk for police. When resistance escalates to refusing to handcuffed and acting in a belligerent and threatening manner, police almost always use force to detain the person.

If HaLevi had allowed himself to handcuffed immediately, or if had done so immediately after being struck by the male officer, and police had continued to strike him, then the force used from the point HaLevi submitted onward could easily be judged to be excessive.

The problem is, that is not what HaLevi did.

I've made this point before but I'll make it again now: The law does not work the way Chabad hasidim and many other haredim persist in thinking it does.

It doesn't matter whether Halevi had permission to sleep there or not.

All that matters is whether HaLevi resisted arrest or not.

And as you can see from the video, unfortunately for HaLevi, he most certainly did:

Past that point, there is a much larger point I've made many times before: The lack of housing for homeless men and women between the ages of 18 and 62.

The Jewish community – including Chabad and haredim as well as Modern Orthodox and non-Orthodox – has no housing for adults who are not disabled or seniors.

The public shelters run by the city are often dangerous hell holes.

There are several hundred young Jewish adults who were born in haredi families who are now homeless in NYC.

Many were thrown out of their family homes as minors because they came out as gay or because they decided not to be religious.

Many others fled physical and sexual abuse.

The Jewish community has almost no services for kids like this when they are still minors and none when they become adults.

I don't know Ehud HaLevi's story, but he should not have needed to sleep in the Aliyah Center – he should have had safe temporary, semi-permanent or permanent housing to go to.

He doesn't because we as a community do not take care of our own. We also don't take care of those who are not technically our own and we don't even give much financial support to Covenant House and the other non-Jewish charities that help young homeless adults and teens.

Haredi communities and Chabad have for years denied this problem exists and have done nothing credible to alleviate it.

Perhaps the arrest of Ehud HaLevi will finally cause change.

Update 10:12 am CDT – Despite claims made by Crown Heights activist Barry Sugar and State Assemblyman Dov Hikind, what happened at the Aliyah center matches the account I told based on the Crown Heights dot info post.

Cops showed up at the Aliya Institute on E. New York Ave. in Crown Heights on the evening of Oct. 8 after receiving a call about a fight between two men, a community source told the Daily News.

But Zlamy Trappler, 24, a volunteer security guard at the center, said he called cops because he found the shirtless man drunk and sleeping in the lounge of the center, which provides services to young Jewish adults.…

[The video shows that as] Halevi gets to his feet, Trappler comes in, and Halevi appears to have a heated exchange with the cops and Trappler, who leaves. The exchange between Halevi and the officers intensifies, with the male cop removing a pair of handcuffs, the video shows. Halevi pushes the male officer's hands away from his body, the video shows.

The officer then charges Halevi, the video shows, punching him in the face, while the female officer appears to pepper-spray him and beats him with what appears to be a truncheon.…

"I regret making the call. I should have let him sleep. It spiraled out of control," said Trappler.

Sara Feiglin, wife of Rabbi Moshe Feiglin, who runs the youth center, confirmed the account given by CrownHeights.info. The rabbi did not respond to a request for comment.

What was the night of October 8?

It was the end of Simchat Torah, the Jewish holiday celebrated in Chabad – especially in Crown Heights – with widepread drunkeness.

When they confronted HaLevi he resisted them – probably because he was, in fact, drunk (or very hung over).

In a situation like that, police have no way to know if the suspect is on drugs like PCP, if he's armed, etc.

HaLevi resisted and police did what they had to.

They have done it less artfully than they should have, but what they did was still legal and required for their own safety.

Chabadniks are complaining the arrest (please see the video posted below) of a homeless man sleeping in the Aliyah Center for "at risk" "troubled" youth in Crown Heights is police brutality. But is it?