Earlier this week (while many of the Diaspora's Orthodox and haredi Jews were still too drunk to notice), Israel's right wing prime minister Benjamin Netanyahu called for early Knesset elections that his coalition is expected to win. The exact date of the elections has not yet been announced. 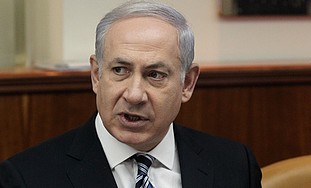 Netanyahu supposedly called early elections now because the Likud Party he heads and its political allies are projected to win a strong majority.

However, I think that analysis is flawed.

Hours before Netanyahu called the new elections, word leaked that Netanyahu's haredi coalition partner United Torah Judaism (UTJ) was about to split into two (or perhaps even three) separate parties, leaving Netanyahu with the very real possibility that one, tow (or even three) of these new parties would fail to get enough votes to meet the minimum threshold for electing a member to Knesset. While this arguably would be good for Israel, it would be bad for Netanyahu, who relies on UTJ to keep his current coalition in power.

At about the same time that the expected UTJ split(s) leaked, word also leaked that Rabbi Ovadia Yosef had approved the return of Aryeh Deri to the leadership of the Sefardi haredi Shas political party.

Deri is perhaps the most talented politician in the country behind Netanyahu. But he is also a convicted felon who served time in prison for accepting bribes and public corruption.

Despite that, Deri has a real chance to become prime minister in the future, something Netanyahu would probably like to prevent because Deri has shown a willingness to work with and support parties to left of Likud. Worse than that for Netanyahu, if Deri handles his return well, he would be a credible challenger to Netanyahu sooner rather than later.

But calling elections now make a Deri return less likely to smooth, and it might even delay it by a a year or two, which also benefits Netanyahu.

At the same time, these snap elections might prevent UTJ from splintering.

Even if UTJ stays unified, if Likud and its non-haredi allies gain a significant number of seats, UTJ's power should shrink.

Time – the exact amount has not yet been specified – will tell.

For those of you so inclined, Israel Hayom has a good breakdown of Israel's various political parties and the current number of seats each has in the Knesset.

Earlier this week (while many of the Diaspora's Orthodox and haredi Jews were still too drunk to notice), Israel's right wing prime minister Benjamin Netanyahu called for early Knesset elections that his coalition is expected to win. The exact date of the elections has not yet been announced.