Despite the pleas of 48 students, teachers, parents, Chabad rabbis and a Chabad’s lawyer – more than 70 people in all – Coral Springs, Florida’s City Commission earlier this month denied Chabad's Rohr Bais Chaya Academy's request to operate its girls' dormitory in a residential neighborhood of the city. 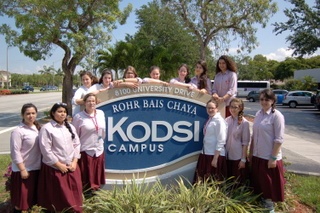 Despite the pleas of 48 students, teachers, parents, Chabad rabbis and a Chabad’s lawyer – more than 70 people in all – Coral Springs, Florida’s City Commission earlier this month denied Chabad's Rohr Bais Chaya Academy's request to operate its girls' dormitory in a residential neighborhood of the city, the Sun Sentinel reports.

The vote was 4 to 1 against Chabad.

“The use of the property is the issue. It’s not about the girls. It's not about religious beliefs. It’s about the safety if the girls boarding there,” Commissioner Larry Vignola told reporters before the vote.

Coral Springs’ Mayor Roy Gold spoke about “life safety issues” created when the four unit apartment building was illegally converted by Chabad into a dormitory housing as many as 40 girls. A concrete wall was removed and balcony exits were covered.

“I hope you realize it wasn't appropriate. It was dangerous,” Gold told Chabad and its supporters.

"I don't think that neighborhood was ever meant to have a dormitory," Vice Mayor Tom Powers reportedly said.

Referring to "unsafe conditions" inside the converted apartments, Commissioner Claudette Bruck said that, “Our responsibility it to the entire community…A dorm on the Chabad of Coral Springs property would seem to be an answer to all these concerns.Let’s try to work on this together. Let's find a solution."

The city recommended that the seven-year-old dorm be closed in June for safety violations. It did not receive a special exception to operate because it is considered to be “detrimental to the area” and “inconsistent with the general public welfare.”

Neighbors complained at the time about the safety issues and about the girls’ loud behavior, including talking on cell;phones outside the dorm at night. They also complained about the school’s large bus driving over neighbors’ property.

When the matter came to hearing on October 2, the owner of a neighboring apartment building asked Chabad Rabbi Moshe Rabin, president of the Alliance for Education Inc. which operates the dorm and school, if his initials and signature were on a copy of a bank mortgage document that specified that Rabin (who previously owned the building) would not modify it or change the building’s zoning classification.

Rabin admitted that he had initialed and signed the document. He allegedly resigned as president of the Alliance for Education, Inc. before the final hearing on the issue, which took place on October 11. Rabbi Yankie Denburg has reportedly been named Alliance president in Rabin’s place.

Rabbi Denburg was reportedly upset with the commission's decision.

"The commission can't tell us how much they love us and want to work with us and give us the cold shoulder," Denburg said after the vote.

But according to Denberg, the Alliance's board of directors believe the wrong decision was made seven years ago. "Mistakes are meant to be learned from,” he said.

Denburg told the Sun Sentinel that the illegal construction inside the apartments will be removed and the apartment building will be restored to its original condition.

"We're going to put the building back to where it was and rent it out,” Denburg said.

"It was a sad situation," a neighbor told the paper, "but I'm glad it went the way it went. It should have been handled seven years ago."

Students are being housed in private homes and in another dorm in Coral Springs, and some parents were asked to take students in their homes, as well.

Despite the pleas of 48 students, teachers, parents, Chabad rabbis and a Chabad’s lawyer – more than 70 people in all – Coral Springs, Florida’s City Commission earlier this month denied Chabad's Rohr Bais Chaya Academy's request to operate its girls' dormitory in a residential neighborhood of the city.