Rabbi Menachem Youlus was sentenced to 51 months in federal prison today – the maximum sentence recommended under the US Sentencing Commission’s guidelines. 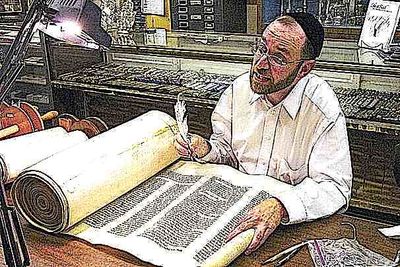 Youlus pleaded guilty in February to defrauding donors who gave his charity hundreds of thousands of dollars to recover and restore ‘lost’ Torah scrolls that survived the Holocaust. But the supposed Holocaust Torahs were fakes, scrolls purchased by Youlus on the black market or from synagogues.

Actual Torah scrolls and fragments of Torah scrolls that survived the Holocaust do exist, but Youlus’s scrolls were not among them.

Youlus, who also owns a Jewish bookstore in Wheaton, Maryland, told donors he traveled the world to recover Torah scrolls lost or hidden during the Holocaust, including one he claimed to have recovered at Auschwitz and another from Bergen-Belsen.

"I guess you could call me the Jewish Indiana Jones," Youlus once claimed.

But Youlus almost never traveled overseas during the years he said he was scouring Europe for Holocaust Torahs. Instead, he bought old Torah scrolls in North America, refurbished them, and then sold then as Holocaust Torahs to synagogues across America.

Some of the money Youlus raised from donors to support the “rescue” of the “Holocaust Torahs” was actually used to pay his children’s private school tuition and for personal expenses like his meals and health care.

Youlus’s attorney Ben Brafman told the Associated Press that Youlus had actually “squirreled away" most of the money he stole, and claimed that the victims would get back all of their money.

"I will carry that shame and dishonor with me for the rest of my life,” Youlus reportedly told the court today. “… I know I have lifetime of atonement ahead of me.”

Much of the next five years of that will be spent in a federal prison that is yet to be determined.

Rabbi Menachem Youlus was sentenced to 51 months in federal prison today – the maximum sentence recommended under the US Sentencing Commission’s guidelines.