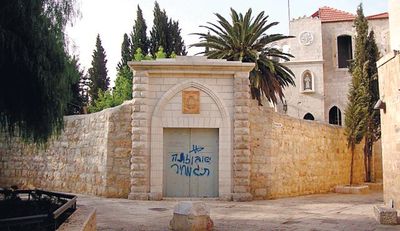 The Church of the Dormition. The graffiti on the door reads, "Jesus, son of a bith” and "price tag.”

Another church has been defaced with anti-Christian and pro-Jewish-settler graffiti.

Unknown vandals defaced the walls of the Franciscan Church of the Dormition on Mount Zion in Jerusalem on Tuesday.

Police reportedly confirmed the vandalism and told Ynet that an investigation had opened.

The vandalism follows an similar attack last month at the Latrun monastery and a string of mosque and church attacks before that. Many of the attacks, including the Latrun attack, also involved arson. There have also been a long string of frequent spitting attacks by haredim against Christian clergy in Jerusalem's Old City that stretch back over many years.

"We must not harm other religions' sanctuaries. We cannot accept this phenomenon in our midst, it goes against Judaism and damages Israel,” Peres said.