Antisemitism? Famous NYC Restaurant Enforces Minimum On Haredim, Not On Others

A popular haredi shidduch spot is the bar of a high end non-kosher NYC restaurant and haredim are infamous there for sitting at the bar or on the terrace overlooking the water and only ordering – water. 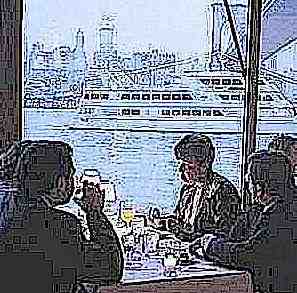 The River Café, a famous NYC non-kosher restaurant with amazing water views and a $100 three-course price-fixe menu, has been accused of antisemitism because it enforces its $25 per person minimum exclusively on haredi and Orthodox Jews – and against non-Orthodox and non-Jews who come to the restaurant wearing gym attire like sweat pants.

The New York Post set out to prove antisemitism – but it did not try to prove that the restaurant enforces the same policy on poorly dressed patrons, as well:

The Post sent a Jewish couple to the bar. The husband, wearing a yarmulke, and the wife, dressed in a simple long skirt, were told the bar was full.

They were told they could sit on the empty terrace and pay a $25-per- person minimum.

Five minutes later, two Post reporters, wearing no religious garb, were seated on the terrace and were not required to pay a minimum. The bill for a coffee and a gin-and-tonic totaled $18.51.

The Post claims the actual notes allegedly written by restaurant management read as follows according to the Post:

“If they look as if they will only order water (not that we stereotype or anything) mention the minimum right away,” one note says. “If they ask for the bar and there is room, tell them there is a minimum at the bar as well.”

Another note reads: We “have decided that when people come in for the bar and are A. wearing sweat pants and B. religious top hats and strings, you must say for A. gym bar and for B. water bar. Thanks.”

But the actual notes as posted by the Post have a slightly different reading:

The Post appears to have cut off what was written above the text of the second note. as well, but it is clear the last word in that missing text is "minimum."

The Post closes its piece with the following bit of information that really should have been placed at the top of the article, not buried at its end:

The River Café…has become a popular date spot with Orthodox Jews, who are required by their religion to choose public places for dates.

Current and former employees said these couples come for the view and non-alcoholic beverages, and are frowned upon because they take up seats and don’t spend enough money. [emphasis added]

But most other haredim do date in the context of a shidduch, arranged marriage. But they don't touch each other and they don't seclude themselves. In Israel, they usually don't travel together to and from the date location. In America, they often do.

These haredi dates usually take place in hotel lobbies (a Jerusalem favorite) or in bars attached to non-kosher restaurants (common in New York).

The latter provides a unique advantage – the only other haredi people who might see the couple together will be other haredi couples who are dating (or haredim eating non-kosher food in the restaurant). And since no one wants to advertise who they're dating (or that they're having lobster in the The River Café), the shidduch can remain a secret until the engagement (or forever if no engagement takes place).

When I met women for these types of shidduch dates, I bought her drinks and, in Jerusalem, food. And so did my friends who were shidduch dating. It never occurred to me or to them that a hotel or restaurant bar should allow us to sit for several hours without us spending enough money to make it worth it.

But haredim appear to feel more entitled now, and the idea of sitting in a place for three hours where meals cost $100 per person and ordering two cokes and two glasses of water doesn't seem to be problematic for some of them.

What are The River Café and restaurants like supposed to do? Lose money on people who are abusing their hospitality?

And what of the New York Post that pursued the 'antisemitism' angle of this story but which did not pursue the sweatpants-gym clothes angle?

All I'll say is what the Post did is very bad journalism.

Antisemitism? Famous NYC Restaurant Enforces Minimum On Haredim, Not On Others

A popular haredi shidduch spot is the bar of a high end non-kosher NYC restaurant and haredim are infamous there for sitting at the bar or on the terrace overlooking the water and only ordering – water.