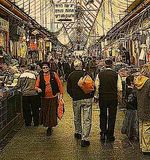 Jerusalem’s large open air market, Mahane Yehuda, is gentrifying. In the last few years, Mahane Yehuda has gone from a gritty remnant of an earlier time to a hip destination, a place where tourists, secular Jerusalemites, and the remaining older traditional Jews of the neighborhoods surrounding the market all shop together with haredim, who are gradually taking over the neighborhoods surrounding it – and who do not like the market's change. 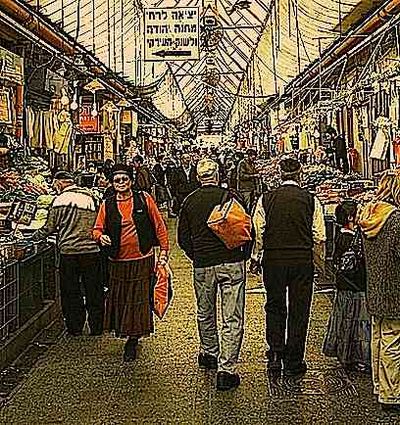 Modesty Squad Made Up Of Haredi Women Harasses Seculars And Tourists In Jerusalem
Shmarya Rosenberg • FailedMessiah.com

Jerusalem’s large open air market, Mahane Yehuda, is gentrifying. In the last few years, Mahane Yehuda has gone from a gritty remnant of an earlier time to a hip destination, a place where tourists, secular Jerusalemites, and the remaining older traditional Jews of the neighborhoods surrounding the market all shop together with haredim, who are gradually taking over the neighborhoods surrounding it.

When haredi demands for gender separate shopping days and hours were turned down by market management a couple years ago, haredim threatened to open their own market in Jerusalem a bit further west, but little has come from that threat.

Instead, haredi modesty patrols have begun to harass shoppers in Mahane Yehuda in a bid to drive away secular shoppers – especially secular women shoppers.

One of [the four haredi women of the modesty squad] approaches a woman who shops at the market once a week. The woman, wearing a tank top and jeans, has her full attention on the tomato box. The haredi woman touches one of her bare arms. The woman turns around and the haredi woman immediately snaps at her, pointing at her bare arms: "Next time don't come to the market like this. Next time you'll come with sleeves."

[Another member of the modesty squad] approaches a young woman in shorts and a sleeveless shirt. "Next time cover yourself," she orders her.

Haredim are also upset with the street parties held in Jerusalem’s city center during the summer months. The parties and the bohemian multicultural atmosphere come with increased crime, haredim complain. And the secular music, mixed dancing and the “immodestly” dressed women, and the renewed night life, pubs, and non-glatt restaurants are damaging for haredi children who are exposed to them. A haredi child living in Mea Shearim can – and do – grow up without ever seeing the downtown bars, rock and jazz concerts, and “immodestly” clad women six blocks away.

But a haredi child whose family recently moved to the neighborhoods that border Mahane Yehuda has a much harder time avoiding those sights and sounds.

Approximately 35 years ago, a similar battle was launched by haredim against the Edison movie theatre located in a downtown neighborhood that had once been almost completely secular.

But that neighborhood, which bordered on the haredi neighborhood of Geulah, not longer exists. Geulah began swallowing it up in the early 1970s.

By the time haredim were rioting in an attempt to force the theatre to close on Shabbat, haredim made up a large minority of the neighborhood. When their riots and protests were finally successful a decade or so later, the neighborhood was much more heavily haredi. Most secular Jews who could had long since fled. More haredim had moved in. Newer movie theaters further west offered safer, riot-free and more comfortable experiences for secular Israelis. The Edison closed.

When I lived in Jerusalem in the early 1990s, the neighborhood was still distinct from Geulah, even though the Edison had closed and much of the secular population had fled.

Twenty years later, the Israeli media and the city refer to the area surrounding the Edison as “Geulah” or even “Geulah-Mea Sharim,” because Mea Shearim, the ultra-haredi stronghold, has also expanded, at least in popular consciousness, and has now swallowed large chunks of the slightly more moderate Geulah haredi neighborhood whole.

"We won't have it. Such a chastity squad is intolerable and is a red line for us," Shimon Darwish, head of the Mahane Yehuda Merchants Association, told Ynet. "They are trying to create a fearful atmosphere and prevent people from coming to the market. We'll do everything in our power to find out who these women are. It won't be a problem to trace them. There are security cameras in the market and I plan to check who they are and make it clear to them that there is no place for them in the market."

Darwish reportedly plans to Mahane Yehuda to root out and stop the haredi women’s modesty squads, claiming that they are “a private initiative,” rather than something ordered by haredi leadership and their male-only modesty squads that often function as enforces and extortionists, beating those who don’t comply with their demands. Still, Darwish wants to nip this in the bud before it gets out of hand.

Yaron Tzidkiyahu is the owner of Tzidkiyahu Delicacies and one of the Mahane Yehuda’s most prominent merchants. Unlike Darwish, he sees a clear link between the haredi female modesty squad and the different haredi modesty squads that operate in haredi and border neighborhoods.

"The haredim are trying to test our boundaries. That's the way I see it. Naturally, we have no intention of giving in, and we'll show them the way out. The market is multi-cultural and we won't let the haredim interfere in what is happening here and set the tone," he told Ynet.

The different chastity squads have been trying in recent years not to get involved in any acts that could be considered criminal, Ynet says, quoting a man it identifies only as Elhanan Buzaglo, a former haredi modesty squad “activist.”

"You must distinguish between women asking other women to dress modestly and violence. Some may be making the request in an obscene manner – and that's their problem," Buzaglo reportedly said. “[The female modesty squad members] may have been to an encouragement lecture and decided to implement what they heard there.”

Real haredi modesty squads don’t operate in secular areas, Buzaglo claimed, because there is no money in it. “Their activity among the haredim brings them donations. Operating among the seculars won't bring them a penny, so they don't go there at all."

Buzaglo's opinion was echoed by Yehoshua Ohev Shalom, an activist of the haredi modesty squad Committee for Purity in the Camp. He told Ynet thathe was unfamiliar with any haredi female modesty squads. But he praised the haredi women’s actions in Mahane Yehuda. "If they strengthen women it's a good thing, isn't it?" Oheb Shalom reportedly said.

Buzaglo, however, is more than just a “former activist” in a haredi modesty squad – something Ynet fails to report.

In 2009 Buzaglo was convicted of being a hired thug for  a haredi modesty squad operation by the Committee for the Purity of the Camp that savagely beat a divorced haredi woman rabbis believed was behaving immodestly. He was sentenced to four years in prison in May 2009. But he's free now.

Jerusalem’s large open air market, Mahane Yehuda, is gentrifying. In the last few years, Mahane Yehuda has gone from a gritty remnant of an earlier time to a hip destination, a place where tourists, secular Jerusalemites, and the remaining older traditional Jews of the neighborhoods surrounding the market all shop together with haredim, who are gradually taking over the neighborhoods surrounding it – and who do not like the market's change.