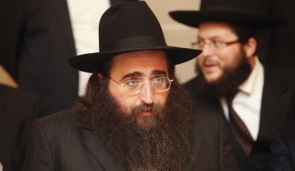 Rabbi Yoshiyahu Yosef Pinto who mediated between Nochi Dankner and Eduardo Elsztain in the Ganden Holdings Ltd. deal, told Elsztain that an investor in Israel would make two or three-fold return on the money.

"It is very important for the Israeli economy and to ensure the livelihoods of tens of thousands of Jews, and to help all the people who invested through insurance and pensions, which lent money to companies," Pinto told Elsztain. He added all investors in Israel "would not be hurt, and will see their money back, even doubled and tripled. The global economic crisis is affecting Israel too, and mutual ties between Jews in the Land of Israel and in the Diaspora should be tightened so that the livelihoods of Jews everywhere will not be harmed."

Pinto has faced tax evasion accusations in Israel and in New York, and is accused of spending a large portion of his charities revenues on himself and his immediate family, rather than on charitable ventures. The FBI is currently investigating election law violations by a Republican congressman from Staten Island and Brooklyn that centers on his followers.