« US Supreme Court Releases Orders List – Without Rubashkin's Case | Main | Will God Forgive Your Sins If You Did This? » 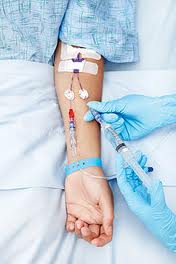 The New York Times reports on something I've long complained about here – elderly, sick and frail haredim who choose to fast on Yom Kippur even though Jewish law forbids them to.

In order to successfully complete the fast without dying or becoming seriously ill, these foolish hasidim have an IV drip of saline solution and electrolytes inserted in their veins.

The Times describes the process:

It will look like a scene out of a hospital ward.

In a basement room crowded with medical equipment, about 20 people at one time — sick, pregnant, frail and elderly, or on lifesaving medication — will be hooked up to intravenous drips on Wednesday to receive nutrients they need to get through the day.

The unlikely setting will be the main synagogue of the Bobov Hasidic sect, a cavernous house of worship in Borough Park, Brooklyn, that sets up hospital beds and intravenous drips in advance of the Jewish holiday of Yom Kippur. The patients will be frail Orthodox Jews trying to make it, with a little boost, through a day of religiously required fasting.

In recent years, hundreds of frail Jews have turned to intravenous feeding on Yom Kippur, which begins Tuesday at sundown and ends 25 hours later, to avoid violating the prohibition against eating on the holiest days of the Jewish calendar.…

Rabbis have traditionally allowed exceptions for those who are frail or ill, encouraging people to eat rather than gamble with their health. Some Jews ignore their cautions, which explains why Yom Kippur is one of the busiest days of the year for Hatzolah, the volunteer ambulance corps located in many Jewish communities; too many elderly or sick people try imprudently to fast. Yet many of those who are rigorously Orthodox say they feel guilty for breaking the tribal taboo against eating.

Enter Mr. Fleischer, who is active in the Bobov sect’s communal efforts to aid the sick and homebound. Ten years ago, after a frail friend told him that he needed an intravenous feeding to get through the day, Mr. Fleischer, with the help of Maimonides Medical Center nearby, set up virtual clinics at the Bobov synagogue, five other locations and people’s homes. Medical technicians at the clinics administer IV nutrient drips as worshipers lie on 20 hospital cots for half an hour or so each before returning to prayer.

Last year, 200 people used the service. All those participating must orally certify that they have received permission to do so from both a rabbi and a doctor. Healthy Jews are usually excluded.…

Although people have long arranged for such drips on their own and there is a similar program in the Hasidic neighborhood of Williamsburg, the scope of Mr. Fleischer’s synagogue-based program is striking.…

“It’s very hard for a person who has always fasted to face the reality of a situation where they have to eat,” he said. “This way they still feel they fasted and Halakhically, they didn’t eat. The mouth is still dry.”…

Many rabbis have allowed intravenous feeding, even though, according to Web sites on Jewish law, one of the most respected deciders, Rabbi Moshe Feinstein, who died in 1986, ruled that eating was preferable to an intravenous drip…

These hasidim who fast when they should not are fools who, even with these IVs (and sometimes because of them), endanger their lives and trample on Jewish law.

Fast days are not some kind of magic days that grant a people a free pass for their sins just as long as they don't eat.

God doesn't need or want your IV's to accept your teshuva for missing ma'ariv or eating food from a non-heimish hechsher (or even outright treife).

The fast is not a rabbit's foot or amulet.

Too bad the hasidic mind appears to lack the rational component necessary to understand this.