Brooklyn DA Charles Hynes: "As of this morning, I have 114 Orthodox Jews under indictment [for child seuxal abuse]." Is Hynes lying? Yes, he is. But in a way, that lie pales in comparison to his manipulation of haredi child sexual abuse victims and advocates. 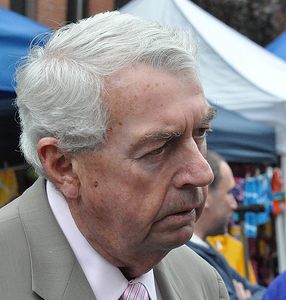 Not surprisingly, the bulk of the piece is based on my reporting (and here) the reporting of the Daily News and the background reporting by The Jewish Week. None of us are credited.

That said, what the Observer reports is important.

It names the Jewish Federation official, Anita Altman, who set up victims advocates to help Hynes, and it exposes part – but not all – of the Forward's role in that.

What the Observer doesn't report is that the Forward unethically withheld the names of two victims advocates who are considered by Hynes to be compliant, and who as a result are expected to help him in his reelection. It printed the names of the other advocates who are not viewed as being in Hynes' pocket, damaging their standing in the community of victims.

Altman should be fired by the Federation for her role in this affair.

But that is unlikely to happen, largely because the New York Jewish Fedration has never been known for having anything close to an ethical or moral outlook, and it's unlikely it will suddenly develop one.

Meanwhile, Hynes is now claiming to have 114 haredi child sexual abusers "under indictment," even though his previous figures in the high 90s and low 100s were proved false by The Jewish Week and several other media sources, including the New York Times.

But somehow, the Observer fails to note that:

…“Before I had that policy, I wasn’t able to have any prosecutions. As of this morning, I have 114 Orthodox Jews under indictment, [Hynes said].”

Amid a recent spate of career-sinking bombshells such as Vito Lopez’s sexual harassment scandal (also courtesy of the Times), the coverage was damaging but not damning. An ugly conclusion was hard to avoid: Mr. Hynes had seemingly ignored serious crimes or handed out wrist-slaps to members of the Hasidic and Orthodox communities. In exchange, these cloistered neighborhoods, which cherish their autonomy and insularity from the secular world and its authorities, gave him critical support at the polls.

The election for district attorney in Brooklyn isn’t until next year. Still, the revelations have left Mr. Hynes in what would appear to be one of the trickiest positions of his long career as Brooklyn’s D.A. On the one hand, he must dispel the now-widespread impression that his office is playing politics and doling out special treatment to a critical voting bloc. And yet, for a position that is decided based on notoriously thin voter turnout, it would appear essential to maintain the allegiance of these reliable supporters.…

Mr. Hynes has not left it merely to chance that his intensified efforts to win justice for victims receive attention. According to Mark Appel, in early July, Mr. Hynes arranged a series of meetings with a small and influential group of Hasidic community members who have been vocal supporters of molestation victims. Arranged through Anita Altman, a liaison he uses as a go-between with the Orthodox community, the talks were proposed as a platform for victims’ supporters to speak directly with Mr. Hynes and his top prosecutors and voice their concerns.

“It was a vehicle, so everyone could have a safe environment to work out their differences,” Mr. Appel said.

Predictably, the conversation quickly turned to the issue of releasing the names of the accused. Mr. Hynes again refused, and when the meeting adjourned, its participants emerged wondering what the purpose of the get-together had been, given how intractable the district attorney appeared.

The next day, Mr. Appel received his answer. The Jewish Daily Forward, a popular publication in Hasidic precincts, published a report describing how Mr. Hynes had reached out to key victims’ representatives.

“I couldn’t believe it,” Mr. Appel said. “He had set the whole thing up to create this illusion.”

Mr. Hynes or his people had apparently leaked the story in order to create the impression he was tightening his relationship with the victims’ groups and to ameliorate their persistent criticism of him. (Mr. Hynes’s office declined to comment on the matter.)

In reality, Mr. Appel said, Mr. Hynes continues to shelter the identity of accused molesters as an ongoing gesture to powerful rabbis who would still prefer to sweep the molestation issue under the carpet.

“With all the scrutiny the community has received, maybe they know it’s not possible to hide from the issue anymore,” Mr. Appel said. “The continued withholding of names, though, would at least seem like some small conciliation.”

Always the savvy political animal, Mr. Hynes had figured out a way to placate both sides.…

Brooklyn DA Charles Hynes: "As of this morning, I have 114 Orthodox Jews under indictment [for child seuxal abuse]." Is Hynes lying? Yes, he is. But in a way, that lie pales in comparison to his manipulation of haredi child sexual abuse victims and advocates.