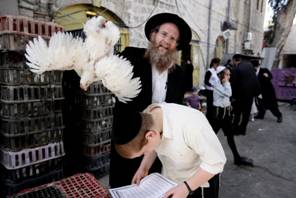 Activists Will Rally In Brooklyn, NY to Protest Chickens in Kaporos Rituals

Alliance to End Chickens as Kaporos

NEW YORK, Sept. 18, 2012 /PRNewswire-USNewswire/ -- The Alliance to End Chickens as Kaporos is hosting two 2-hour protest demonstrations in Brooklyn September 23 & 24, 2012 to protest and eliminate the "swinging" and slaughtering of chickens in Kaporos ceremonies the week before Yom Kippur – the Jewish Day of Atonement – in which chickens are ritually sacrificed by many (but not by most) Orthodox Jews by being waved over practitioners' heads and butchered in public ceremonies.

What: Protest the needless use of chickens in Kaporos rituals and urge that money be used instead. When: Sunday September 23rd 4-6 p.m., and Monday September 24th 6-8 p.m. Where: Eastern Parkway, between Kingston and Albany Avenues, diagonally in front of the Brooklyn Jewish Children's Museum (792 Eastern Parkway, Brooklyn, NY 11213). Why: The use of chickens in Kaporos rituals is cruel and contrary to Jewish teachings. It is not a mitzvah but a bizarre custom that originated in the middle ages. Most observers give money to charity which they express symbolically by swinging coins while reciting prayers for mercy and peace. Waving and slaughtering chickens as Kaporos violates tsa'ar ba'alei chaim, the Jewish mandate to avoid needlessly hurting animals and to show them compassion.

Chickens used in Kaporos rituals are trucked from factory farms to urban areas and held in transport crates for days without food, water or shelter. Brooklyn resident and Alliance member Rina Deych has witnessed chickens packed pitifully in crates on top of crates in the cold and rain for entire nights. She writes: "I live in the heart of Boro Park. Every year, I see chickens ROUTINELY thrown into dumpsters, the dead along with birds who are dying of dehydration, injury, exhaustion, and pain."

New York State Anti-Cruelty Law, Article 26, states that animals must have fresh food, water, and protection from the elements. Kaporos practitioners violate this law so flagrantly and mercilessly that they mock their own prayers for mercy and peace. And while they may claim to distribute the butchered birds to the poor, this distribution is invoked as a secondary justification that according to rabbis and other critics is meaningless because the mistreatment of the chickens used in Kaporos renders them non-kosher – a point Rabbi Avi Zarki in North Tel Aviv made this year in "Israel: Kaporos Under Fire Earlier Than Usual" in The Yeshiva World, September 4, 2012. Moreover, chickens dead and alive have been reported in Los Angeles and New York being thrown into garbage bags without any charitable goal.

"Chickens suffer terribly in Kaporos rituals," says the Alliance to End Chickens as Kaporos. "They suffer in being callously held with their wings pinned painfully and injuriously backward and in being packed in crates, often for days, without food or water leading up to the ritual. They suffer in being slaughtered and handled as if they were inanimate objects, unworthy of kindness, mercy or respect."

Criticizing the gross mishandling of the birds, Orthodox Rabbi Yonassan Gershom, a Breslov Hasid, wrote in his blog last year of the cruelty of holding chickens suspended by their wings: "Imagine somebody holding your arms behind your back and then suspending you by the elbows to get an idea of what this method would feel like. The feet of a chicken are made to support its weight; the wings are not."

Rabbi Gershom is not alone in objecting to the whole performance. More and more Orthodox rabbis are speaking out against using chickens in Kaporos rituals on grounds of religion, morality, and compassion for animals. In 2010, Rabbi Steven Weil, CEO of the Orthodox Union of Rabbis in New York City, told the Alliance that the OU opposes using chickens as Kaporos due to the ritual's "insensitivity" to the birds and the lack of historical foundation.

Rabbi Shlomo Aviner, Head of Jerusalem's Yeshivat Ateret Cohanim, stated in a video presentation in 2010 that in the light of cruelty to animals, "It is recommended that one should prefer to conduct the atonement ceremony with money."

Orthodox Rabbi Shmuly Yanklowitz wrote in The Jewish Week that Kaporos observers "should be cultivating mercy for all those who suffer and not be perpetuating pain on sentient creatures in the name of piety."

Rabbi David Rosen, International Director of Interreligious Affairs for the American Jewish Congress and Former Chief Rabbi of Ireland, wrote: "Those who wish to fulfill this custom can do so fully by using money." Rabbi Shlomo Segal, Rabbi of Beth Shalom of Kings Bay in Brooklyn, states: "The pain caused to the chickens in the process of performing Kapparot is absolutely unnecessary. Giving money is a more humane method."

"There is a perfectly acceptable Kaporos practice that not only avoids animal cruelty, but can help reduce hunger and show compassion to all," says the Alliance to End Chickens as Kaporos. "Money can be used instead of swinging and sacrificing chickens, and funds raised can be given directly to charities. People ask mercy from G-d. The chickens need mercy from us. We ask Kaporos observers to show mercy and use money instead of chickens."

Last year, the Alliance rescued 121 chickens from Kaporos, and they are living happily in sanctuaries. No animal should have to suffer the horrific fate these birds were slated for.  We look forward to a day when people evolve past the use of chickens and other animals in sacrificial rituals in all faiths. Maybe in the process we will learn to be kinder to all species, including our own.

The Alliance to End Chickens as Kaporos is a project of United Poultry Concerns that was formed in New York City in 2010. It is an association of compassionate people everywhere who seek to replace chickens in Kaporos ceremonies with money or other non-animal symbols of atonement. To learn more about the Alliance and its objectives, please go to http://www.EndChickensAsKaporos.com.

United Poultry Concerns is a nonprofit organization that promotes the compassionate and respectful treatment of domestic fowl. http://www.upc-online.org.