« Haredim Riot In Jerusalem; 3 Arrested | Main | A Rabbi So Immature » 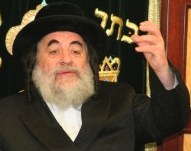 A Shiva Call In A Prison
Shmarya Rosenberg • Failedmessiah.com

Yeshiva World reports that the Vizhnitzer Rebbe visited Israel’s Massiyahu Prison Tuesday to pay a shiva call to a son of the late Shomrei Emunim Rebbe who is serving a prison sentence for an unnamed crime in the prison’s yeshiva program.

Besides the private shiva call, the Vizhnitzer Rebbe also spoke in the prison’s synagogue to an audience that included former President of Israel Moshe Katsav, who is serving a prison term for rape, and Jewish terrorist mass murderer Ami Popper, who reportedly has become a ba’al tshuva (penitent; newly Orthodox) in prison.

Update 8-30-2012 7:32 am CDT – It appears that the son of the Shomer Emunim Rebbe is in prison for child sexual abuse, rape, sodomy, obstruction of justice and incest. However, this decision is dated 1997, and he would have needed to be sentenced to at least 15 years for this to be the reason he's in prison now, and that's a very long sentence to be handed down in Israel. So we need to look into this further.

The Vishnitzer Rebbe visited Israel’s Massiyahu Prison Tuesday to pay a shiva call to…
Failed messiah was established and run in 2004 by Mr. Shmarya (Scott)Rosenberg. The site was acquired by Diversified Holdings, Feb 2016.