This is not the first time residents of Bat Ayin – founded by Chabad Rabbi Yitzchak Ginsburgh, who is the mentor of the most extreme settler rabbis on the West Bank – have been involved in terror attacks against Arabs.

Three young Jewish boys from the West Bank settlement of Bat Ayin were arrested earlier today on charges that they fire bombed an occupied Arab taxi 10 days ago. The boys are 12- and 13-years-old, according to a report on Arutz Sheva’s website.

Six people were burned in that attack, two of them seriously. One was left in critical condition in a coma with serious burns. Five of the victims are members of the same Arab family, including two small children.

The three young suspects have been remanded until at least tomorrow morning when a judge will decide whether to release them to their families or hold them in some form of detention.

Bat Ayin was founded by Chabad Rabbi Yitzchak Ginsburgh in 1989 on land purchased by the Jewish Agency in the early 1900s.

Its population is about 1,000. Most Bat Ayin residents are Chavakuk (חבקו"ק) – meaning they follow a combination Chabad, Breslov, (Rabbi Abraham Isaac) Kook, and (Shlomo) Carlebach theologies.

In 2002, Bat Ayin residents attempted to blow up a Palestinian girls school in Abu Tor, a neighborhood in East Jerusalem. Shlomo Dvir, Ofer Gamliel, and Yarden Morag were convicted of attempted murder.

The three men parked a baby carriage filled with explosives outside the main entrance to Arab school at 3:30 A.M. on April 29, 2002. They set the explosives’ timer for 7:25 A.M., when the students would be arriving at school.

Divir’s brother, who lived in another West Bank settlement, was convicted of supplying the three men with the explosives – which he stole from an IDF base.

Two of Ginsburgh's students – Rabbis Yitzhak Shapira and Yosef Elitzur – are rosh yeshiva's in the settlement of Yizhar. They wrote the racist book Torat HaMelech which endorses the murder of Arab non-combatants – even the intentional murder of Arab babies – during the time of war, which they define broadly as Ginsburg does to include Israel's current state of existence. 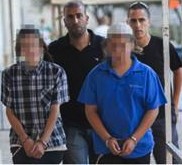 Two of the boys in handcuffs

This is not the first time residents of Bat Ayin – founded by Chabad Rabbi Yitzchak Ginsburgh, who is the mentor of the most extreme settler rabbis on the West Bank – have been involved in terror attacks against Arabs.