Britain's outgoing chief rabbi tries to pull an intellectual fast one in defense of brit milah, Jewish ritual circumcision. But Sacks – who is considered to be a student of philosophy – is outed by Allan Nadler. 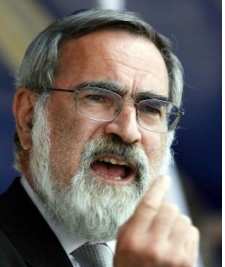 Allan Nadler has a piece in the Forward about the many people who have misrepresented or misunderstood Baruch Spinoza, the most famous excommunicated Jew.

Nadler, who has been studying this for a decade, is not easily shocked by such incidents.

Even so, Nadler writes, the whopper told by Sacks was shocking:

…Having spent more than a decade investigating the many fanciful Jewish modern reinventions of Spinoza, I thought myself impervious to surprise by even their most outlandish iterations. Until, that is, I read a recent article by the British chief rabbi, Sir Jonathan Sacks, railing against the decision of a court in Koln, Germany, to ban circumcision.

“It is hard to think of a more appalling decision!” Sacks wrote. “Did the court know that circumcision is the most ancient ritual in the history of Judaism, dating almost four thousand years to the days of Abraham? Did it know that Spinoza… wrote that brit milah in and of itself had the power to sustain Jewish identity through the centuries?”

That Spinoza — who considered the ritual practices of Judaism entirely archaic and often barbaric — is marshaled by an Orthodox chief rabbi in the defense of any Jewish rite is quite incredible, especially given what Spinoza actually had to say about circumcision.

“There is nothing whatsoever that the Jews today can arrogate to themselves above other nations,” Spinoza wrote in the third chapter of his Theological-Political Treatise. “As to their continued existence for so many years when scattered and stateless, this is in no way surprising, since they have separated themselves from other nations to such a degree so as to incur the hatred of all, and this not only through external rites alien to the rites of other nations, but also through the mark of circumcision which they most religiously observe and… by itself might preserve their nation forever.”…

Nadler goes on to point out what should be obvious: 1.) "This entire chapter [of Spinoza’s] is a nasty polemic against the doctrine of the election of Israel," and 2) Spinoza is not endorsing circumcision or any accommodation by a modern state for it. Spinoza is attacking circumcision. "The justices in Koln could have very convincingly deployed Spinoza in support of their decision to ban circumcision," Nadler adds.

Obviously, Sacks knows what Spinoza meant, and he doesn't really think Spinoza supported or endorsed beit milah. But he was willing to misuse Spinoza's name in an effort to defend a ritual Spinoza despised.

Another distortion by Sacks that Nadler doesn't mention is the idea implied by this sentence: “Did the court know that circumcision is the most ancient ritual in the history of Judaism, dating almost four thousand years to the days of Abraham?"

The circumcision practiced 4,000 is very different from the brit milah done today. It involved removing only a small part of the foreskin's tip, at most.

The ritual changed after many Jews during the Hellenist control of Judea near the end of the Hasmonean  Dynasty started to reverse their circumcisions by stretching the remaining foreskin. The proto-rabbis ordered that the entire foreskin and the membrane below it be excised to make foreskin restoration difficult and uncomfortable.

But there is even evidence that the earliest circumcisions done in the Middle East and Africa involved a completely different process than what we have today, and than what late Second-Temple-era had. Those early circumcisions made a small lengthwise slit in the tip of the foreskin to make its opening wider so the "seed" ejaculated by the penis would more easily be expelled. It was apparently believed to increase fertility.

Posted at 05:36 AM in Circumcision, MO & Chardal | Permalink

Britain's outgoing chief rabbi tries to pull an intellectual fast one in defense of brit milah, Jewish ritual circumcision. But Sacks – who is considered to be a student of philosophy – is outed by Allan Nadler.