“Whoever raises a hand on Migron will have it cut off and the prime minister should know that," Rabbi Elyakim Levanon warned. 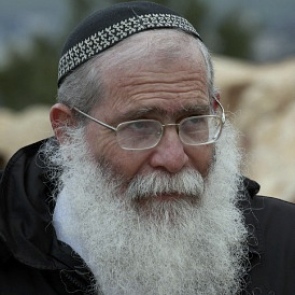 Senior Zionist Orthodox Rabbi Warns Netanyahu Over Illegal West Bank Outpost Evacuation
“Whoever raises a hand on Migron will have it cut off and the prime minister should know that," Rabbi Elyakim Levanon warned.
Shmarya Rosenberg • FailedMessiah.com

Referring to Prime Minister Benjamin Netanyahu, who by law must enforce a High Court of Justice ruling to evacuate and dismantle the illegal West Bank outpost of Migron, Rabbi Elyakim Levanon warned of violence yesterday during a speech given at a conference for Jewish settlers displaced by the Gaza pullout in 2005.

“Whoever raises a hand on Migron will have it cut off and the prime minister should know that," Levanon reportedly said.

In a conversation with Ynet after his speech, Levanon claimed that what he said during that speech was not incitement to violence because he meant "for the heavens" to make his words "come true."

"One cannot ignore the pattern of things that happened to people involved in the expulsion like Nisso Shaham [the lead police officer for the Gaza evacuation who is now under criminal investigation for sexual assault and has been forced to take administrative leave], Dan Halutz [former Chief of Staff of the Israel Defense Forces who resigned in 2007, about five months after a financial scandal in which he was found to have acted legally was made public], Moshe Katsav [Israel’s former president, who was convicted of rape and imprisoned], and it's true for Netanyahu as well,” Levanon told Ynet.

Levanon, who is a senior leader of the Zionist Orthodox movement known as Religious Zionism, is the chief rabbi of the West Bank’s Shomron Regional Council.

Levanon went on to extoll Orthodox Jews – even haredim who do not serve in Israel’s military.

"We [the Zionist Orthodox and haredim] shall conquer Israel,” Levanon reportedly continued. “In mighty forces we shall go anywhere, the yeshiva students will go to the army, because otherwise there will be no army. Who will join the army? Those who raise two kids and a dog?"

Migron was illegally built on privately owned Palestinian land. The Government of Israel agreed to evacuate and dismantle it in 2008 in response to the ruling of Israel’s High Court of Justice.

During the weekly Sunday cabinet meeting, Netanyahu spoke about the evacuation.

"We will honor the court's decision and meanwhile continue to strengthen the settlement enterprise. We did so in Beit El and will do so in Migron. We've already set up alternative housing and we hope things go smoothly,” he reportedly said.

“Whoever raises a hand on Migron will have it cut off and the prime minister should know that," Rabbi Elyakim Levanon warned.